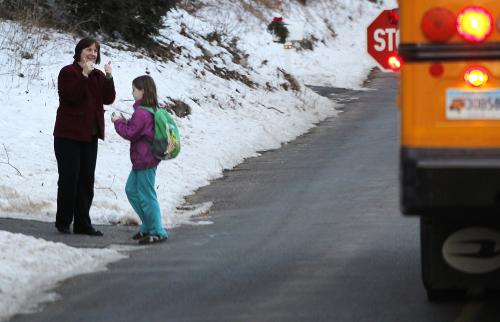 Across Newtown’s sprawling Sandy Hook neighbourhood, home to the school where the December 14 attack took place, children ranging from kindergartners to fourth graders boarded buses for the seven-mile journey to their new school.

Chalk Hill Middle School, an unused school in the neighbouring town of Monroe, was refurbished specifically for the students from Newtown, and now bears a new but familiar name – Sandy Hook Elementary School.

At a home across the street from the school, a banner read: “We’re all in this together, together we are stronger.”

Mailboxes in the neighbourhood had balloons of green and white, the school’s colours, and many houses had handmade posters out front reading “Welcome Sandy Hook Elementary kids.”

Heightened security meant media was kept well away, but from a small plane above the new school, children getting off buses were seen running, hopping and skipping through the doors. A stream of parents’ cars dropped students off at the main entrance.

Anca Roberto, 35, put her five-year-old daughter, a kindergartner, on the bus not far from the old Sandy Hook school, still a bullet-riddled crime scene closed to everyone but police.

Roberto said she had been nervous about the return to school until Wednesday, when she and her daughter attended an open house at the new location. Her daughter was thrilled to find her cubby intact, moved from the old school, and she “screeched” when she saw her friends.

The students “hugged, and they played and they were just kids,” Roberto said. “The teachers were just amazing.”

At the end of the day, Roberto described her daughter’s first day back as a normal routine, and “what they needed.”

With safety foremost on the minds of parents and officials in the wake of the second-deadliest school shooting in US history, the school was outfitted with a new security system.

A heavy police presence was on hand, too. Armed police officers patrolled the grounds, all outside doorways and sidewalks were under surveillance, and a police checkpoint restricted access to the school to students, parents and staff.

Asked if she was nervous about her daughter’s safety, Roberto said: “I was until yesterday. There’s just so much supervision. They’re in the safest place.”

The new school has been decked out as a “Winter Wonderland,” with the help of thousands of children from around the world.

Officials tried to mitigate the absence of teachers and staff killed in the attack, including school principal Dawn Hochsprung, by bringing back some former Sandy Hook staff. The school’s interim principal, Donna Page, had worked at the school until 2010.

Syeda Suriya Ahmed said her son Mamnun Ahmed, 6, a first grader, initially didn’t want to go to school but he did go. “He was scared about the police,” Ahmed said as Mamnun ate a snack at their home after the end of the school day.