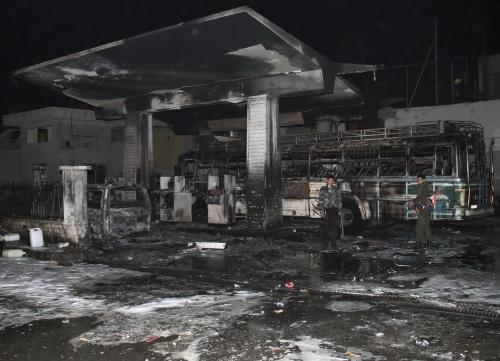 PHUKET: (Reuters): At least 11 people were killed and 40 wounded when a car bomb exploded at a crowded petrol station in the Syrian capital Damascus yesterday.

The station was packed with people queuing for fuel which has become increasingly scarce during the country’s 21-month-long insurgency aimed at overthrowing President Bashar al-Assad.

The semi-official al-Ikhbariya television station showed footage of 10 burnt bodies and Red Crescent workers searching for victims at the site.

The opposition Revolution Leadership Council in Damascus said the explosion was caused by a booby-trapped car.

There was no immediate indication of who was responsible for the bombing in the Barzeh al-Balad district, whose residents include members of the Sunni Muslim majority and other religious and ethnic minorities.

“The station is usually packed even when it has no fuel,” said an opposition activist who did not want to be named. “There are lots of people who sleep there overnight, waiting for early morning fuel consignments.”

It was the second time that a petrol station has been hit in Damascus this week. Dozens of people were incinerated in an air strike as they waited for fuel on Wednesday, according to opposition sources.

In northern Syria, rebels were battling to seize an air base in their campaign against the air power that Assad has used to bomb rebel-held towns.

More than 60,000 people have been killed in the uprising and civil war, the United Nations said this week, a much higher death toll than previously thought.