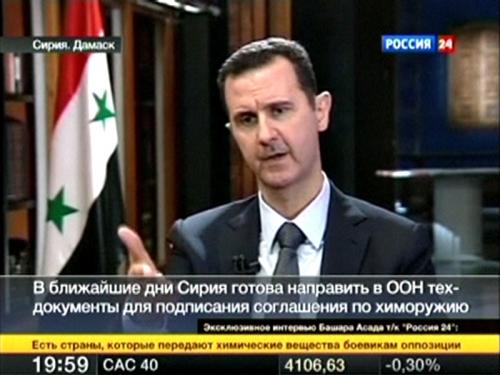 The United States reacted cautiously. Several U.N. diplomats and a U.N. official told Reuters on condition of anonymity that it was not yet clear that Syria had fulfilled all the conditions for legal accession to the treaty.

“I think there are a few more steps they have to take (before Syria is a signatory) but that’s why we’re studying the document,” a U.N. official said.

Syria was one of only seven countries not to have joined the 1997 Chemical Weapons Convention, which commits members to destroying their stockpiles.

Erin Pelton, spokeswoman for the U.S. mission to the United Nations, said Syria’s declared intention to join the Chemical Weapons Convention was just a first step.

“This long overdue step does not address the pressing and immediate need for a mechanism to identify, verify, secure and ultimately destroy Assad’s chemical weapons stockpile so they can never again be used,” Pelton said. “It also does not include immediate consequences for non-compliance.”

“The international community must insist on immediate progress toward destruction of Syria’s CW (chemical weapons) program and also make clear that there will be consequences for any Syrian noncompliance,” she said.

Pelton added that the United States would “continue our ongoing discussions with the Russians and key international partners to urgently respond to the Assad regime’s blatant disregard for international norms.”

U.S. Secretary of State John Kerry and Russian Foreign Minister Sergei Lavrov are meeting in Geneva to try to hammer out the details of a Russian plan for Syria to place its chemical arsenal under international control.

Syria agreed to the plan after the United States threatened military strikes to deter it from using chemical weapons after an August 21 gas attack killed hundreds of people.

Assad’s government blames the rebels for that attack. Washington blames the government and says the sarin gas used in it killed more than 1,400 people, including many children.

Russia, a staunch Assad ally, has vetoed three U.N. Security Council resolutions that would have condemned Assad’s government and threatened it with sanctions. The United States has accused Russia of holding the council hostage on the question of Syria.

According to the Chemical Weapons Convention, a country does not become a full member of the treaty until 30 days after its accession or ratification documents are deposited with the United Nations.

U.N. Secretary-General Ban Ki-moon’s press office confirmed receipt of a letter from Syria that said Damascus would immediately begin complying with the terms of the treaty.

“In their letter, the Syrian authorities have expressed their commitment to observe the obligations entailed by the Convention even before its entry into force for Syria,” it said in a statement.

U.N. spokesman Farhan Haq told reporters earlier on Thursday that the United Nations had received an “accession document” from Syria that was currently being studied and translated.

Ja’fari said Assad signed a legislative decree on Thursday that “declared the Syrian Arab Republic approval to accede to the convention.” He said Foreign Minister Walid al-Moualem had written to the Organisation for the Prohibition of Chemical Weapons to notify it of Syria’s decision to join the convention.

“The chemical weapons in Syria are a mere deterrence against the Israeli nuclear arsenal,” Ja’afari said as he waved a document he said was a CIA report on Israel’s chemical weapons program.

“It’s a deterrent weapon and now the time has come for the Syrian government to join the (convention) as a gesture to show our willingness to be against all weapons of mass destruction,” he said.


Rape trial puts focus on India’s death penalty paradox
Reuters / Phuket Gazette
PHUKET: An Indian judge will announce on Friday whether four men should hang for fatally raping a young woman on a bus last December, in one of the biggest tests in years of India’s paradoxical attitude towards the death penalty.

Indian judges hand down on average 130 death sentences every year, but India has executed just three people in the past 17 years. Despite its apparent reluctance to carry out the sentences, last year India voted against a U.N. draft resolution calling for a global moratorium on executions.

In November, India ended what many human rights groups had interpreted as an undeclared moratorium on capital punishment when it executed a militant convicted for the 2008 militant attack on Mumbai. Three months later, it hanged a man from the Kashmir region for a 2001 militant attack on parliament.

“In the past year, India has made a full-scale retreat from its previous principled rejection of the death penalty,” said Meenakshi Ganguly, South Asia director of Human Rights Watch.

She called for the complete abolition of the death penalty.

Prosecutors want the “harshest punishment” to be given to bus cleaner Akshay Kumar Singh, gym instructor Vinay Sharma, fruit-seller Pawan Gupta, and unemployed Mukesh Singh for the murder of the woman to send a signal to society that such attacks would not be tolerated.

Sex crimes are commonplace in India, and social commentators say patriarchal attitudes towards women have not been diluted by rapid economic growth.

Comments on social media websites and elsewhere suggest that popular opinion is in favour of executing the men, although a survey by CNN-IBN-The Hindu newspaper in July showed Indians were divided on the merits of capital punishment.

The victim’s parents have said their daughter’s dying wish was for her attackers to be “burned alive”.

The four men were found guilty this week of luring the 23-year-old trainee physiotherapist onto a bus on December 16, raping and torturing her with a metal bar and then throwing her naked and bleeding onto the road. She died two weeks later.

Defence counsel A.P. Singh urged Judge Yogesh Khanna to ignore the clamour for the death penalty, which he said was a “primitive and cold-blooded and simplistic” response.

Rarest of the rare

If the men are sentenced to death, a potentially years-long appeals process lies ahead. The case will go the High Court and then the Supreme Court. If the courts confirm the sentences, the final decision will lie with the president, who has the power to grant clemency.

The death penalty should be imposed only in the “rarest of rare” cases, according to a Supreme Court ruling in the early 1980s. But opponents, including former High Court judges, say the reality is quite different.

Indian courts sentenced 1,455 prisoners to death between 2001 and 2011, according to the National Crime Records Bureau. During the same peri