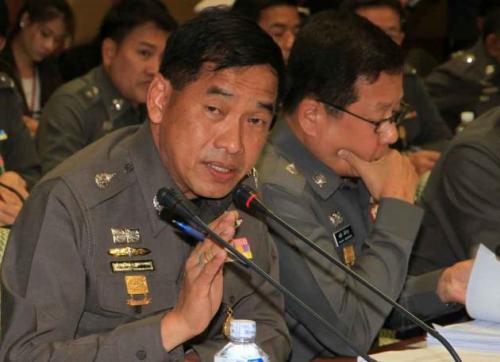 The Ombudsman’s office spokesman Raksagecha Chaechai said Thursday that all further queries will be put on hold for the time being. Royal Thai Police commander Pol Gen Adul Saengsingkaew had written to the Ombudsman’s Office explaining that a panel had been set up to look into Camrongwit’s conduct.

The Bangkok police chief had reportedly flown to Hong Kong a while ago so fugitive former PM Thaksin Shinawatra could pin a decoration on his chest. Raksagecha said the Ombudsman’s Office would not intervene in the police bureau’s scrutiny process.

He added that the Ombudsman’s Office would only take action if there are complaints about the investigation or if the punitive actions are not transparent once the probe has been completed.

The claim contradicted a previous report on social media by BRN executive Hassan Taib that Thailand had accepted four out of five of the separatist group’s demands.

The NSC will ask the Cabinet on Tuesday to extend the imposition of the Internal Security Act (ISA) in the deep South for 90 days from September 20 to December 19.

The council would assess the situation in Pattani’s Mai Kaen district, Yala’s Betong and Kabang districts, and Narathiwat’s Waeng and Sukhirin districts for a possible lifting of the ISA there. Kabang would most likely be the first, he said.

Paradorn said Thai authorities were considering the five demands so that the peace dialogue with the BRN would continue. The next round of talks was slated for the third week of October, but the government hadn’t yet accepted any of the demands.

Although some points could be further discussed, others, such as the demand for the Thai government to recognise the rights of the “Melayu Patani nation” needed to be carefully analysed, he said.

The Thai side should be able to draw conclusions about the five demands before the next talks, he added.

The five demands are: that the Thai government acknowledge the rights of the “Melayu Patani nation”; that detained suspects be released; that Asean members, the Organisation of Islamic Cooperation and international NGOs observe the peace dialogues; that Malaysia act as a mediator, not just a facilitator for the dialogue; and that the BRN be recognised not as a “separatist” but as a “liberation” movement.

Paradorn’s comment was made at Government House after yesterday’s meeting with Deputy Prime Minister Pol General Pracha Promnog and related agencies about a situation update, as well as the budget on development and national security works in the deep South.

The unrest continued yesterday with three Rangers killed and one wounded in a shooting in Pattani’s Yarang district.

The shooting took place at 11.40am while the six-strong Ranger team was engaged in social-relations work, fixing roofs for villagers in Ban Binya Moo 2 in Tambon Khlong Mai.

A group of seven or eight gunmen on a Toyota Vigo pickup truck pulled over near where the Rangers were working and opened fire, leading to a brief gunfight before the gunmen fled with the victims’ two guns.

He said spent bullets at the scene were found to be linked with many violent cases in the area. Adul went to Yala’s Muang district yesterday to preside over an opening ceremony of a “317 brave police” monument honouring slain police officers in the deep South.


Bangkok to get a Bt2.44bn storm tunnel
The Nation / Phuket Gazette
PHUKET: A new tunnel in Bangkok to drain floodwater from five inner districts northwards to a Chao Phraya outlet in Nonthaburi will be ready for use by September 2016, after a contract was signed yesterday between the Bangkok Metropolitan Administration and the contractors.

The 6.4km tunnel is the second in the capital and will channel waters in Huay Khwang, Din Daeng, Chatuchak, Phya Thai and Dusit areas, including six major roads prone to flooding after heavy rain, Bangkok Governor Sukhumbhand Paribatra said.

Half of the Bt2.44-billion budget to build the tunnel is subsidised by the government, he said, adding that the BMA was planning to build another two such tunnels.


System of direct admission blocking reform, Chaturon says
The Nation / Phuket Gazette
PHUKET: The proportion of students enrolling in universities through the schools’ direct-admissions systems must be reduced, with more students being made to enter the system through the central entrance-examination channel, Education Minister Chaturon Chaisang said yesterday.

While most universities were now independent after opting to remove themselves from the country’s education bureaucracy, they would still be required to follow any future Cabinet resolution requiring them to reduce their admissions quotas, he said.

Chaturon said universities’ large admissions quotas would likely result in the total failure of the ongoing education reforms. He did not elaborate.

In recent years, many universities have opted to recruit high-achieving students through their own admissions processes, in which they conduct exams and other mandatory tests on their own.

Chaturon said he would prefer to see the universities show a willingness to cooperate, adding that he had assigned all relevant bureaus under the ministry to work out initial solutions with the universities on a voluntary basis to achieve his objective in the meantime.

Nation University rector Pong-in Rak-ariyatham, as head of the Admissions Forum, said a meeting would be held tomorrow (Saturday) to discuss the issue.

He said Chaturon’s policy needed to be discussed, while other practices, such as universities’ grading of students, must be brought under a common and transparent standard before the policy could be followed, whether voluntarily or mandated by a Cabinet resolution.