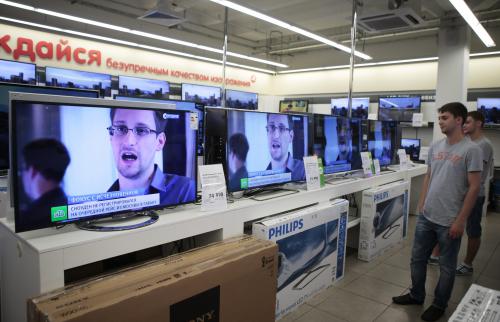 Among allegations aired by Snowden last year were that the U.S. National Security Agency and its British counterpart GCHQ had in 2009 targeted an email address listed as belonging to then-Israeli Prime Minister Ehud Olmert and monitored emails of senior defence officials.

Israel played down the disclosures. But Prime Minister Benjamin Netanyahu said he had ordered the matter examined and that “there are things that must not be done” between allies.

Glenn Greenwald, who as a writer for Britain’s Guardian met face-to-face with the fugitive Snowden and has written or co-authored many of the newspaper’s stories based on his material, was asked in an Israeli television interview whether the ex-contractor had more secrets to tell that related to Israel.

“Yes. I don’t want to preview any stories that aren’t yet published, but it is definitely the case that there are a huge number of very significant stories that are left to report,” said the Brazil-based Greenwald, speaking to Channel Ten TV by video link.

“We have only had these documents for seven months, which, given their volume and complexity, is not a very long time. There definitely are stories left that involve the Middle East, that involve Israel. The reporting is going to continue at roughly the same pace that has been happening.”

Pollard, a former U.S. Navy intelligence analyst, was sentenced to a life term in 1987 in the United States for spying for Israel. A succession of U.S. presidents have spurned Israeli calls for his pardon.

In what appeared to be a bid to calm the clamour, Netanyahu said Israel constantly sought Pollard’s release and did not need a “special occasion” to discuss his case with Washington.

“I think you are absolutely right to contrast the Jonathan Pollard case with revelations of American spying on their closest allies within the Israeli government, because it does underlie, underscore exactly the hypocrisy that lies at the centre of so much of what the U.S. government does,” he said.