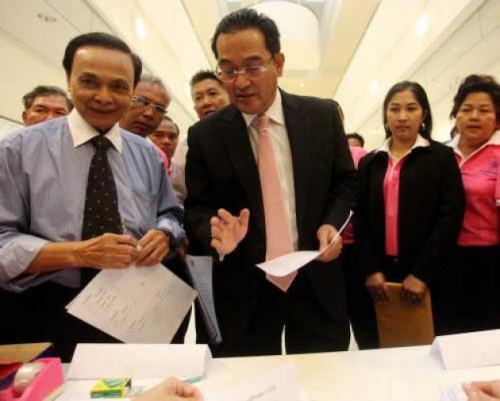 Yingluck, who is also caretaker defence minister, expressed concern over a call by the People’s Democratic Reform Committee (PDRC) to shut down Bangkok next Monday.

She said the plan to cut power and water supply at state agencies would worsen the situation and cause trouble for residents in the capital, in addition to reducing confidence in the country’s political system and economy.

“That will be the last option. We will try to avoid using it,” Yingluck said, adding that the Internal Security Act would still be in effect.

Yingluck visited Suvarnabhumi International Airport yesterday to provide moral support to security officials. Some 12 companies of police and two companies of troops were deployed to ensure security at the airport.

While Yingluck was making the inspection, police applauded and shouted “PM, fight on”, prompting her eyes to brim with tears.

The troops applauded only when instructed to do so by a police spokesman over the public address system.

There have been suggestions for Yingluck to impose an emergency decree to deal with the “Bangkok shutdown”, according to a Pheu Thai Party source.

With a state of emergency in effect, the military would have to take charge and oversee operations to deal with the protesters. But key military figures have allegedly opposed the move and said would prefer to play a back-up role to the police.

The source, who is a key Pheu Thai figure, said certain military leaders appeared sympathetic with the anti-government PDRC.

“Now is the right time to test the Army’s willingness” to help the government deal with the situation, the source said.

“If the Army does not comply with the government’s request for it to be involved, the prime minister has the right to remove the military leaders.” But PM Yingluck has not responded to that idea.

The source said leaders of the military had promised to persuade PDRC leader Suthep Thaugsuban to end the protest if she dissolved the House of Representatives. But when the PM did so, they failed to persuade Suthep because he was backed by a powerful figure that once created trouble for the Thaksin government.

Chaikasem said PDRC secretary general Suthep Thaugsuban was facing a sedition charge, which carried a maximum penalty of death. So if people chose to support Suthep by joining the shutdown protest, they would also be regarded as committing a wrongdoing, Chaikasem said.

He cautioned that protesters could also be injured in clashes with the PDRC’s opponents. The minister said people who joined the simultaneous rallies on Monday would violate Articles 116 and 215 of the Criminal Code for unlawfully assembling to cause turmoil in the capital.

“Those who already know but still join the protest will be deemed as engineering or supporting sedition,” Chaikasem said on TV.

“The government would like to tell the people to use their judgement and be aware that if they join in the Bangkok Shutdown, they will be breaking the law and cause damage to the country.

“Besides, there is a risk that they will be hurt as there might be clashes with those who have different opinions and groups of people with malicious intent.”

In a related development, the National Anti-Corruption Commission (NACC) is due to decide today whether to pursue a case against Yingluck and 382 other parliamentarians accused of violating the Constitution, for voting in support of a bill to amend the Constitution to try to change the composition of the Senate.

Even if the NACC resolved to pursue a case against her, the PM would not need to stand down as caretaker prime minister, a legal expert claimed. The case was filed against her as an MP, a position she no longer holds after the House was dissolved in early December.

Meanwhile, a close friend of Thaksin who served in the Yingluck government, suggested that Yingluck step down before the shutdown on January 13. “In a war when you can’t make an advance, the commander has to order a retreat. Yingluck should leave her post and announce that she will not return to power,” said the source, who was Thaksin’s former classmate from the Armed Forces Preparatory School.


Candidates petition court after failing to register
The Nation / Phuket Gazette
PHUKET: Pheu Thai party-list MP candidate Pichit Chuenban filed a petition at the Supreme Administrative Court yesterday(Mon) to issue a temporary injunction to “protect” 29 Pheu Thai candidates in eight southern provinces who were unable to register as candidates in the February 2 poll.

Party spokesman Prompong Nopparit blamed election commissioners in the South for failing to change the venues for candidate registration in response to blockades by anti-government protesters. This “failure” resulted in some candidates being unable to lodge applications to run in the election.

He noted that local Election Commission (EC) officials did not change to other registration venues that were safer, and that Pheu Thai was obliged to seek court intervention for its candidates’ applications to be endorsed.

There were also representatives from the Chart Pattana and Plod Nei parties, who petitioned the court and blamed the EC for not enabling candidates to register in the stated districts by not having officials at the registration site. They claimed this amounted to negligence of duty on the part of the EC. The court accepted the petition and was considering the case as of press time yesterday.

The Election Commission in Bangkok suggested yesterday that candidates who were unable to register in the South due to obstruction by anti-government protesters should petition the Supreme Court.

The EC also held a training course for accountants working for political parties in hope of reducing legal cases related to accountancy claims by half.

EC secretary-general Puchong Nutrawong said affected candidates should proceed to the Supreme Court and petition the court, adding that he believed the court would give them justice. No candidates were able to register in 28 districts in eight provinces in the South.

Puchong reiterated that the EC was impartial and did not favour any political party while carrying out its duty under the law.

The commission explained its regulations to 158 accountants from 38 political parties at Muang Thong Thani in a bid to reduce legal cases related to political parties’ accounting matters. There have been 800 legal cases involving accountancy problems over previous years and these have cost the EC much time and money. So the agency wants to try to cut the number of cases by 50 per cent in the next election.