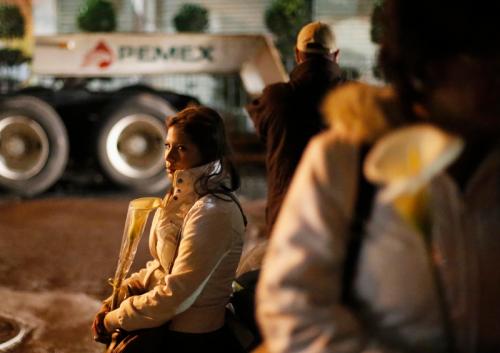 Reuters / Phuket Gazette
PHUKET: Mexican rescue workers found three more bodies over the weekend amid the rubble of a deadly blast that tore through state oil firm Pemex’s main office complex, the government said, as search efforts appeared to near a close.

The death toll from Thursday’s explosion stands at 36, Pemex said via Twitter. Rescue workers had been digging through the last sections of the building’s basement and could soon call off their search. One person was reported still missing.

Attorney General Jesus Murillo said on Friday that it was too early to say if the explosion was due to an attack, an accident or negligence, but he promised results of an investigation in the coming days.

Murillo toured the site on Sunday, but did not publicly comment on the progress of the investigation. Officials have communicated details through social media about the disaster, which struck just before a long holiday weekend.

The investigation will test confidence in President Enrique Pena Nieto, whose Institutional Revolutionary Party ruled Mexico for most of the last century but lost power in 2000, when it was accused of fostering widespread corruption.

Local media reported the three bodies were maintenance workers. A woman who worked as a secretary was still missing, but she was unlikely to be found so deep in the wreckage.

The blast occurred two months into Pena Nieto’s presidency, just as Congress was preparing to discuss his plans to open up the state-run energy industry to more private investment.

Hobbled by heavy state taxation, Pemex saw production slump in the last decade and its safety record has been stained by a series of deadly accidents, including an explosion that killed about 30 at a gas facility last year.