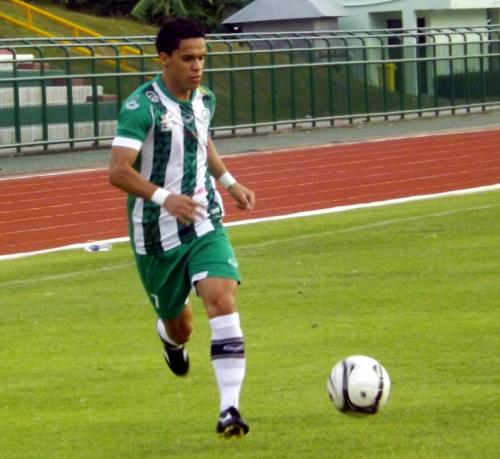 PHUKET: The Southern Sea Warriors’ 4-1 preseason friendly win against the Surat Thani FC ‘Roosters’ last night gave a number of trialists the chance to impress the Phuket coaches and fans.

Of the try-out players, Japanese midfielder Yone stood out the most. The tall midfielder was an imposing presence in the center of the pitch linking up play well and always looking for the ball.

The game was marred by a rash challenge on Nenebi just before half time, which forced the defender to limp off the pitch with what looked like an ankle injury.

Phuket missed a number of chances early in the game. Thai striker Poramat Krongborisut. missed from 3 yards out after Iranian trialist Pouya Hossgini crossed the ball from the left wing.

However, not long after that, Norakorn found the back of the net to bring Phuket FC up 1-0.

Hossgini also missed a chance to impress when he was played clean through, only to shoot straight at the keeper.

In the second half, Phuket FC brought on a number of their first team players but they couldn’t stop Surat Thani from equalizing.

Dudu was easily dispossessed close to the center circle and a defense splitting pass allowed a Surat Thani player to place the ball past the advancing Phuket keeper.

The tireless Boas Chan played in to Niran Panthong, to give Phuket the lead again and moments later Dudu was denied by a great double save.

Giorgi set up Phuket’s third with a wonderful chip into the path of Chana Sonwiset who blasted the ball into the top corner. Chana’s second of the game was a well placed strike into the bottom left corner from just outside the 18 yard box.

After the match, Chana praised Surat’s defenders: “Surat Thani were a decent team and for most of the game had solid defensive marking. We found our chances and made them count in the end. We’ve got a strong team and I’m looking forward to playing more,” he said.

Coach Paniphol told the Gazette how he felt the preseason friendly went: “We used the first half of this match to try out some new players including two Japanese players in the midfield, as well as an Iranian forward. We also fielded some players from the youth team to give them some experience.

“For the second half, we had a chance to practice and improve on our combination plays. There are still some communication issues between the center and back [positions] that we need to improve on before the season starts.”

Despite the win, Club President Pamuk Achiryachai maintained a serious note: “There is still some things we need to work on in terms of communicating and understanding each other on the pitch.

“I want to organize friendly matches like this every week until the season opener [beginning of March], and hope to arrange one between Ranong FC, and perhaps Phatthalung.”