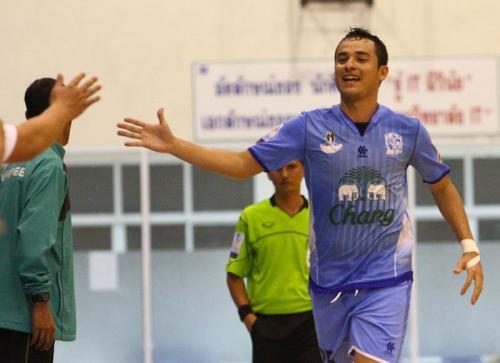 PHUKET: A second-half hat trick from Phuket United’s leading scorer, Jackson Santos, was not enough for his side to beat the Royal Navy FC, who walked away 5-3 winners in a futsal league match on Saturday evening in Bangkok.

Navy’s Amphol Srirakaeo opened the scoring on 8 minutes. The home team then extended their lead with two more goals by Piyanat Nusaya (16, 19), giving Navy a comfortable 3-0 lead by the half.

Phuket’s Brazilian winger Santos put his side in contention with goals on 24 and 27 minutes, bringing the score to 3-2.

However, Piyanat completed his hat trick a minute later, scoring his 24th of the season, and thus moving him up to second in the league for the golden boot race.

Jackson completed his own hat trick in the 32nd minute, narrowing the deficit to one goal again. That goal put the Brazilian back into 5th place for the league in goal scoring.

Both sides remained in deadlock for much of the last eight minutes, but the deadlock broken in the final minute of play by Navy’s and the TFPL’s top scorer, Jessada Chudet, who scored his 26th goal of the season and thus sealing three points for his side.

Navy remain in 4th place of the league, while Phuket actually moved from 9th to 8th place, despite the loss, much thanks to Santos three goals, to ensure a +3 goal difference.

The Andaman Pearl finally return to Phuket, set to take on 10th place CAT FC at home this Wednesday.

To be played at the Saphan Hin Indoor Sports Complex, kickoff will be at 7pm.

Other TFPL results over the weekend: