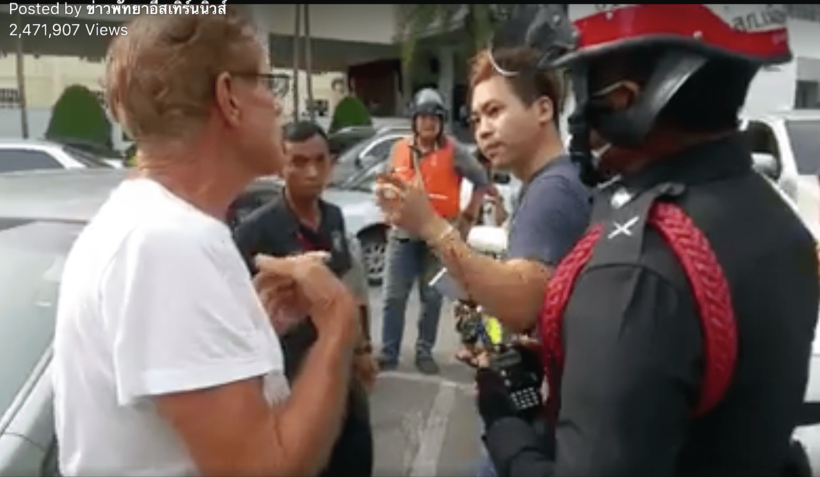 Not 72 years old and not Australian

The ‘Australian’ pensioner who was floored by a left hook in the parking lot of a Pattaya school on Wednesday after a road rage incident is really British national 77 year old George Collins Thaivisa can reveal.

Mr Collins admitted that despite living in Brisbane for many years he considers himself British and travels on a British passport.

He was born in Walsall in the midlands of England. He said he was 77 not 72 as previously reported in error-strewn stories in the Thai press.

This morning he clarified his background in an exclusive interview with Thaivisa before he attended another hearing at Pattaya police station at 10am.

He still maintains his innocence despite facing a charge of attempted murder calling the whole thing a “crazy business”.

The gold shop owner who punched him is being charged with assault and has apologised for his actions.

Mr Collins was knocked down in front of a cop, teachers and students as he was in the parking lot at Aksorn Suksa School in Soi Korphai. He was picking up his nine year old daughter at 3pm on Wednesday.

Posted by ข่าวพัทยาอีสเทิร์นนิวส์ on Wednesday, October 11, 2017

But when police saw video footage from a dash cam of a car presented to them by Sumeth Rungratanaphan, 28, they agreed there was a case to answer for the man now revealed as a British pensioner.

Sumeth said he intends to push the matter to the fullest extent of the law.

A still “dazed and confused” Mr Collins told Thaivisa from his Pattaya home this morning:

“It’s a crazy business,” he said, “but this sort of thing happens in Thailand. I still intend to stay here for the rest of my life.

Regarding what led up to the incident at the school he said:

“This Thai guy attacked ME with his car. He used his car as a weapon and ran me off the road.

Regarding getting the “gardening tool” that resembled a machete from the rear of his car to confront Sumeth he added:

“I retaliated and I’m the one in trouble now.”

Regarding his nationality he confirmed that many details in the Thai press were inaccurate.

“I am British and I travel on a British passport. I was born in Walsall though I lived in Queensland for a while. I consider myself as British.

“I believe my residency in Australia has expired by now,” he said as he has been in Thailand 15 years and married for most of those to wife Pattama who he met in Pattaya.

He asked Thaivisa to help him by presenting his side of the story. He added that he did not want to comment on claims in the Thai press that he was formerly a big player in the fishing fleet business.

Meanwhile the Thai press reported that “99″ gold shop owner Sumeth had asked Thai society to understand his role in the affair.

He told Thai Rath that he was wrong to assault the foreigner especially as it was in front of everyone including a policeman at a school. But he said that it was started by the other party and ultimately he was pushed too far and lost his temper.

He asked to be forgiven for his part but said he had ample evidence to warrant a charge of attempted murder. He fully admitted assault.

Mr Collins – who speaks with an Australian accent – was reported by Thai Rath as saying that it was originally a misunderstanding – when the two cars came close he said he waved the Thai through and he probably thought he was giving him the finger.

There then followed pushing and shoving on the road in their cars before Sumeth pulled in front of him and put his brakes on sharply, he claimed.

He reiterated his claim that Sumeth jumped in front of his car and added that he “hurt his elbows on my windscreen”.

The dash cam footage showed the Thai being hurled into the air before landing on his feet and aiming a kick at the foreigner’s car before getting back into his own and chasing him to the school.

Tnews reported that Mr Collins will have to fight a charge of attempted murder with Sumeth who says that he intends to push that to the fullest extent of the law.

When asked by Thaivisa about facing an attempted murder charge Mr Collins said that he “felt confused” after appearing at the police station yesterday. A lawyer was appointed for him.

He said that he had not been following the story himself in the news and appealed for help.