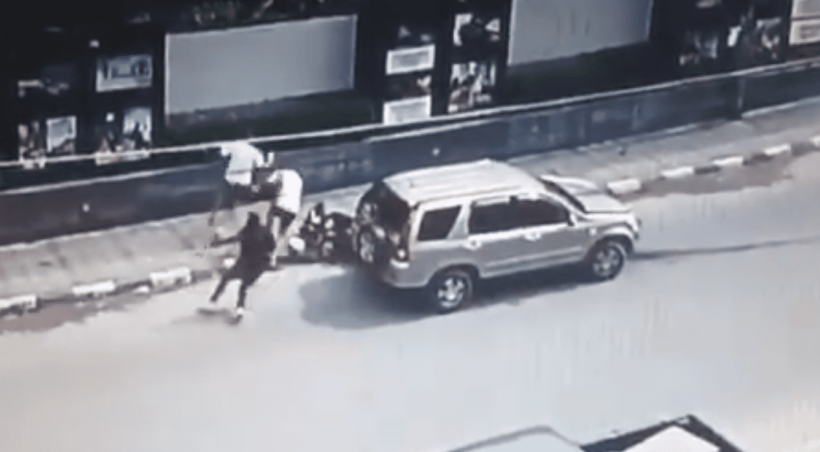 Two Israeli men were arrested at Don Muang International Airport on Sunday night for allegedly stabbing to death a fellow Israeli and seriously injuring his girlfriend on Koh Samui earlier in the day.

Police said 24 year old Dolev Zuarez and 26 year old Eval Bokal were arrested soon after arriving at the airport at 9.30pm. They had flown to the capital on Thai Lion Air flight SL747 from Surat Thani at 8:30pm. After detaining the men overnight, tourist police will flow them back to Surat Thani later on Monday to face murder and assault charges.

The attack was captured on a roadside CCTV camera and the story featured prominently on various Thai media on Monday morning. Initial reports claimed the arrested men were members of a mafia gang. 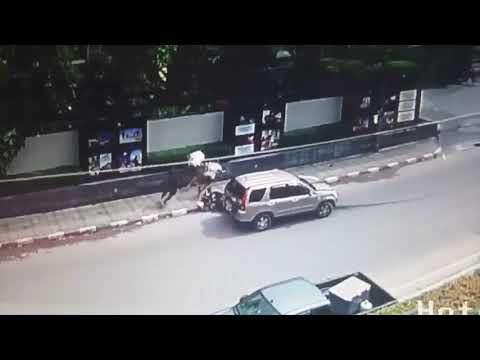 In the clip, the two victims are seen on a motorcycle being run over by an SUV. Then, Mallil is seen getting up to help his girlfriend out of the road. At the moment, another motorcyclist, believed to be a friend of Mallil’s, gives him a lift to help him escape but the SUV is seen reversing, hitting the bike and sending it and the two men to the ground.

A passenger in the SUV then rushes out and runs after the two men. At that very moment, the SUV blocks the CCTV’s view and the passenger returns to the SUV, which speeds off.

Police said the moment missed by the camera was when Mallil was repeatedly stabbed by the SUV passenger.

He died later in hospital. Police said the two arrested men admitted that they had been hired to kill Mallil and they had followed him all the way from Israel. The two suspects were found to have entered and left Thailand several times previously.

The version of the story from Times of Israel HERE.

Driver runs away after flipping Mercedes at Samkong