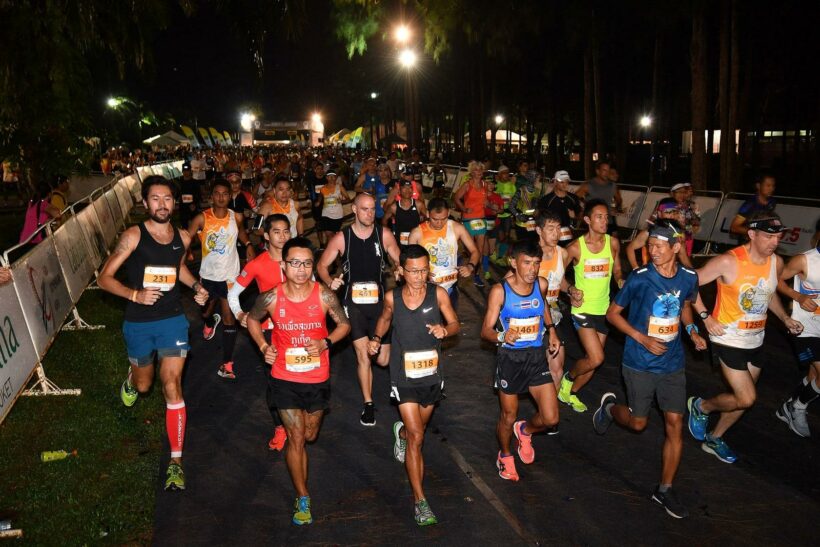 In the Marathon distance it was 2016 winner Koji Nishizawa (winner of the 5km distance the day before in a time of  00:17:09) who at the 10km check point was in the lead group consisting of Ethiopian Kisi Koniti Gerba (second in the 10.5km the day before) and Thai national team runner Supit Chantharat.

After a tough battle over the first half of the course, Nishizawa broke away to claim the Men’s title in a time of 02:44:16 ahead of Chantharat in second with local favourite Jaray Jearanai (THA) finishing fast to take third. In the Women’s division it was Sabrina Polito (ITA) who got the better of a strong field of Thai and international runners to cross the line first in a time of 03:30:27.

Following his record-breaking 2,215km charity run in 2017, Thai rockstar and celebrity Artiwara “Toon” Khongmalai, was back competing at the Laguna Phuket Marathon, and for the first time Thai running idol and author of “Homo Finishers”, Sarawut Hengsawad.

Antiwar “Toon” Kongmalai at the finish line with the official race time of 04:07:42.0
(Photo by: Naratip Golf Srisupab/SEALs Sports Images)

A top-class Half Marathon field included Thai national team runners, Olympians Boonthung Srisung and Natthaya Thanaronnawat. Boonthung was the runaway winner in the Male division in a time of 01:13:08, six minutes faster than last year’s winner while in the Women’s division Natthaya Thanaronnawat claimed the title in a time of 01:27:02 ahead of Maire Nic Amhlaoibh (IRL) in second.

In a packed 10.5km field, last year’s power couple Hiroki Nakajima (JPN) and Tomomi Nakajima (JPN), on honeymoon at the 2017 race and overall winners in the Marathon male and female divisions respectively, returned this year to take out the 10.5km male and female divisions in times of 00:34:25 (two minutes faster than the 2017 winner) and 00:41:49 respectively, and then went on to race the Half Marathon the following day finishing second and third.

While Koji Nishizawa completed the 5km and Marathon double for the Men, in the Women’s 5km it was Hayley Newman of Australia who three-peated in a time of 00:19:46 and went on to finish fourth in the Half Marathon.

Organised by Go Adventure Asia, Laguna Phuket Marathon is certified by AIMS (Association of International Marathons and Distance Races) for a 13th consecutive year and remains a qualifying event for the Boston Marathon. Dates for next year’s 14th edition are June 8 & 9, 2019.