Frequent cases of Chinese tourists damaging coral reefs and other fragile sea natural resources have prompted the Tourism Authority of Thailand (TAT) to seek help from its Chinese counterpart.

Phanu Woramitr, director of the TAT office for Hat Yai, Songkhla and Satoon said on Tuesday that TAT has sent a letter to the Chinese tourism agency asking it to warn Chinese tourists to behave while visiting Thailand.

Chinese visitors have been asked not to touch anything while visiting such places so they won’t cause damage, Phanu said.

He said park and provincial officials have also been alerted to help warn visiting Chinese tourists against damaging the places they visit.

The chief tourism and sports officer for Satun, Atcharin Muangchan, said she has been compiling information about environmental damage caused by tourists, especially Chinese tourists, to coral reefs.

The information will be raised during a meeting to develop Satun tourism on March 2, which will be chaired by the Satun governor and will be attended by representatives from all relevant sectors, Atcharin said.

She said the provincial administration would produce pamphlets in the Chinese language to distribute to tourists to warn them against destroying fragile sea natural resources during their visit. 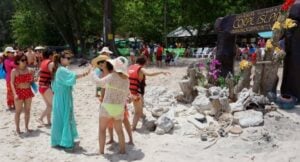