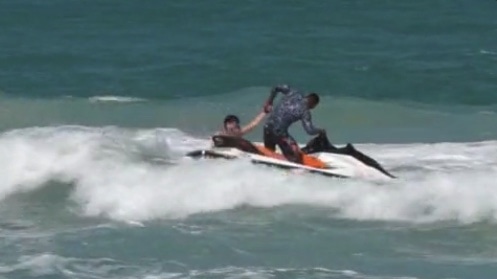 A Russian tourist has been pulled out of the Samui surf by a Jet Ski. The female tourist was swimming at Chaweng Beach on Koh Samui when witnesses say she appeared to get caught in a rip and dragged out to sea.

Jet Ski operators at the beach heard the woman’s screams but was was caught in a ‘washing machine’ of surf and current.

Watch video of the rescue HERE.

The headed out to the spot where she was struggling and plucked her out of the surf. They say the woman was very tired and distressed at this stage. They brought her safely back to the shore where she recovered with help from friends. She didn’t need to go to hospital.

She was later identified as Alla Khanee.

There were warning signs and red flags along the beach but tourists were continuing to ignore the warnings. Samui jet ski operators say they have pulled up to six swimmers out of the surf in the last few days.

“We get nothing for doing this. We do it out of the kindness of our hearts because every life has value,” said one of the jet ski operators.