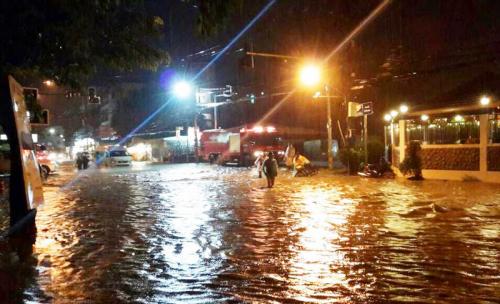 PHUKET: The flood waters from last night’s deluge have cleared from Patong’s streets, but the Thai Meteorological Department (TMD) has issued a weather warning for Phuket and the Andaman region forecasting more heavy rain until at least Friday.

A two-hour torrential downpour last night flooded major streets in Patong, including the party district of Soi Bangla, to depths of half a meter.

Kathu District Chief Weera Kerdsirimongkol this morning confirmed that all flood waters in Phuket’s premier tourist town had receded, in some places by as early as 5am today.

“The flooding started at about 9pm. It took about eight hours for all the excess water to drain and for Patong to return to normal,” Mr Weera told the Phuket Gazette.

In areas where storm drains were not coping with the volume of flood water, Patong Municipality workers used pumps, he added.

Other areas across the island also needed water to be pumped to clear roads, including the road from Wat Naka to Suan Luang (Rama IX, also known as King’s Park – map here) and in front of the Chaofa Thani housing estate on Chao Fa West Road in Chalong.

The TMD warning issued earlier today predicted heavy rain, as well as strong wind and waves due to the southwest monsoon prevailing over the Andaman Sea.

The foul weather is expected to continue until Friday, with increasing rain and isolated heavy falls expected along the southwest coast while the intense southwest monsoon remains. Ships at sea have been warned to proceed with caution, and small boats to stay ashore.

“Waves 2 to 3 meters high from strong winds are likely in the Andaman Sea,” said the warning.