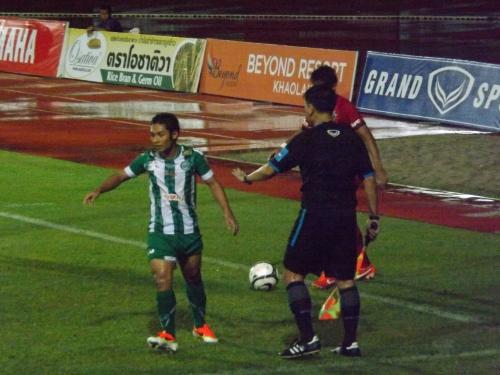 PHUKET: The rainstorm that swept over the island last night forced officials to abandon the football match between Phuket FC and PTT Rayong; the decision was made more than halfway through the 0-0 deadlock at Surakul Stadium.

The two pro Brazilian soccer reps are in Phuket to sign an MoU with Phuket FC at a press conference that will be held in Karon tomorrow.

Meanwhile, power spikes resulting from the nasty weather twice doused the spot lights, halting play and leaving some 3,000 plus fans in complete darkness at the 15,000 capacity stadium off Wichit Songkhram road.

With the lights successfully reactivated both times, and relatively calm weather ensuing during half time, it looked as if play would resume normally in the second half.

However, the June Southwesterly monsoons had different plans; sending strong downpours on the pitch; visibility and agility became greatly limited, as players struggled to tread through the heavily waterlogged pitch.

Officials finally called an emergency meeting, and the players retreated to the locker rooms, before an announcement was given around 8pm that the match would be postponed.

In the locker room, the Phuket Gazette spoke with a few of PTT Rayong’s key players, including star Ivorian forward, #2 Amadou Omatoura, who had proved a nuisance for Phuket’s midfield and defensive line leading up to the match being canceled.

“If it were up to me, I would have just kept playing. Rain or shine, in Rayong I think we would have continued. I’m ready for Phuket any time,” he said.

Amadou scored the winning goal for his side to knock Phuket out of the Toyota League Cup, the last time the two sides met back in March, also in Phuket (click here for story).

The Gazette also caught up with PTT’s skillful Slovakian midfielder, #9 Jozef Tirer who said, “I was told that we will probably play the second half again somewhere in Bangkok next month… I think we had more chances than Phuket, and it’s too bad the rain stopped us. We will be ready for them again,” he said.

Coincidentally, the last two times in Thailand that a professional football match was started, but then abandoned due to nasty weather, were both matches played by Phuket FC, both away to Bangkok FC.

The first time was two years ago. That match (story here) was called off seven minutes before the end of regulation, with Phuket trailing the Iron Bulls 5-2. Although it was initially agreed between the two sides, and the Thai Premier League, that the final seven minutes would be played out on another date, Phuket ultimately forfeited the match and conceded the three points.

The second time was last season, also in Bangkok (story here), when the initial match was called off 25 minutes into play due to the rain. The two sides resumed the match the following morning, and Phuket went on to prevail with a single goal.

Other YL1 results from the weekend:

Not having gained any points, Phuket fell down into 6th place with 22 points, six points behind 3rd placed Bangkok FC (28 points); PTT Rayong remain in 2nd of the 18-team YL1 with 30 points. Airforce United are runaway league leaders with 37 points.

Meanwhile, it was the Korat “Swat Cats” who seized the fifth place spot from Phuket FC, after the Isarn giants downed the Krabi FC “Andaman Eagles” 1-0 on Saturday evening in Nakhon Ratchasima.

Korat now have 23 points after their win, while Krabi are still in 11th with 17 points.

Following their match against Rayong United, the Islanders will return to play an FA Cup Round Three match (32 teams – 16 matches) against TPL side, Ratchaburi Mitrphol FC on Wednesday, June 26 at Surakul Stadium (click here for map).

The Ratchaburi “Dragons” were runaway YL1 champions last season, debuting in their first and only season in the Thai first division before sealing promotion to the elite league in one season.

Phuket lost both of its league matches to the Dragons last year.

Three days after the FA Cup match, Phuket will battle it out for YL1 5th place honors with Nakhon Ratchasima FC in a season’s first half, final showdown on Saturday, June 29.

In related news, Phuket are set to sign an MoU with Brazil’s Cruizero football club, who are currently 2nd place out of 20 teams, after five matches in this year’s Series A league – the top Brazilian pro league.

The signing of the MoU is expected to allow Phuket to utilize Grade A Brazilian talent in the season’s second half vie for promotion.

Following are results from this weekend (week 12 of 20) of the AIS Division 2 Southern League:

and from the Thai Premier League: