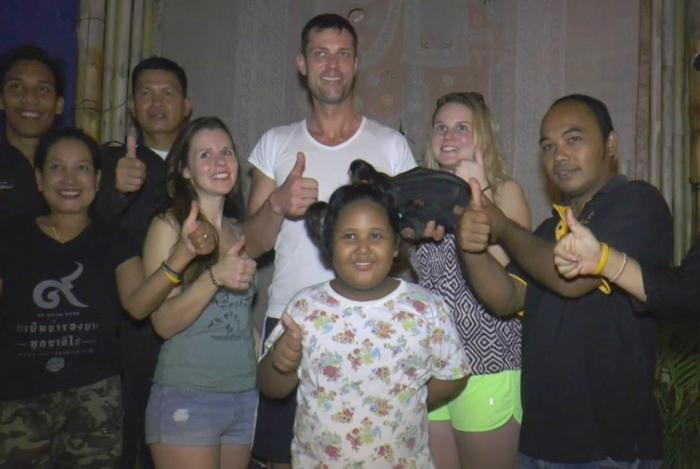 SAMUI: A Good Samaritan yesterday returned a Swiss tourist’s lost bag, after it had gone missing on Tuesday.

The bag, belonging to Markus Joost, contained 16,000 baht in cash, credit cards, an iPhone and a passport.

The 32-year-old Samui resident, Sarawut Somsawat, works as a gardener at the Anantara resort. He reportedly found the bag in front of a picture of His Majesty King Bhumibol Adulyadej on the side of the road near Resotel Beach Resort.

Mr Sarawut made a post on Facebook saying that he was looking for the bag’s owner and later took the bag to a nearby Police Station. When asked why he didn’t keep the money for himself, he said it would have been wrong to take it. He added that the owner of the bag would have been upset if he lost the money.

“It’s common knowledge that if you find something that belongs to another, you should return it to them. I also feel that I did this for my King as I found the bag in front of his picture,” said Mr Sarawut.

Mr Joost was reunited with his bag at The White Pearl Bang Poo Resort, where he met Mr Sarawut accompanied by police officers.

He was reportedly ecstatic when he was handed the bag, and took pictures to post on social media. His Facebook post read: “Thank you so much for returning my bag. I was riding my bike around Chaweng Beach looking for it. I would like to thank the Thai police. Most importantly, I want to say that I really appreciate the fact that the people of Thailand are good people because of their King.”