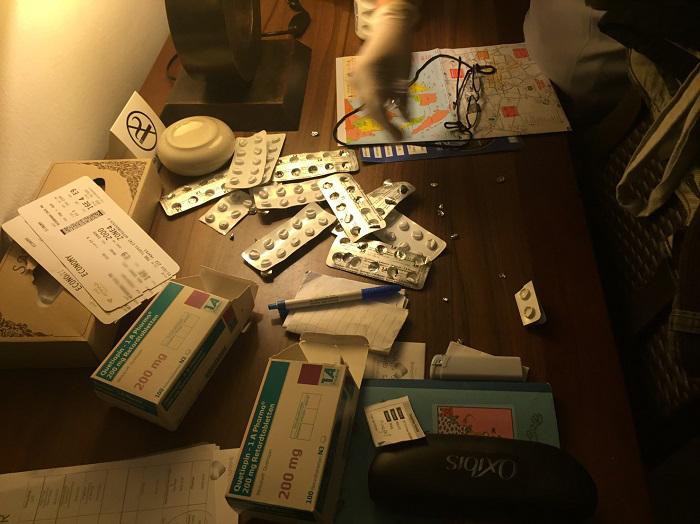 PHUKET: Police are investigating the death of a German man whose body was found Monday afternoon in a Kamala hotel room, where police also found almost a dozen empty packets of the sedative Quetiapine.

Kamala Police responded to a call from staff at Kamala Beach Resort – A Sunprime Resort about 2pm to find the body of German national Mr Herrmann, 48, lying face-up on the bed dressed in shorts and a T-shirt.

The Phuket Gazette is withholding the full name of the deceased until it can be confirmed that his next of kin have been notified.

Investigating officer Lt Somnuek Damkaew said there were no signs of struggle in the room and it is believed the man died about 4 hours before his body was discovered.

On a desk in the hotel room, police found eleven used 10-pill strips of Quetiapine, which is an anti-depressant prescribed as a sleep aid for the treatment of schizophrenia and bipolar disorder.

They also found various identification cards, 270 euro, 2,840 baht, spectacles, keys, a mobile phone as well as air tickets indicating that Mr Herrmann had entered Thailand on November 3 and was due to check out of the hotel and fly to Frankfurt on November 16.

A housekeeper at the hotel told police she had cleaned Mr Herrmann’s room daily and he had always let her in when she visited around 9.30 each morning. However, on Monday morning when she knocked on his door, he shouted something in German and didn’t open the door.

“The maid later found Mr Herrmann’s body after letting herself into the room about 12.30pm when she returned and received no response after knocking,” said Col Somnuek.

“The body was taken to Patong hospital for further examination and the German Embassy has been informed of the death,” the colonel confirmed.