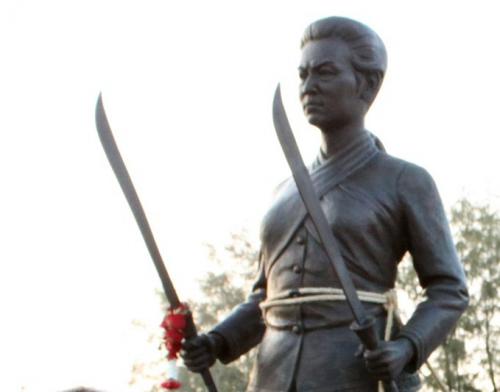 PHUKET: The long-awaited nine bronze statues of important figures in Phuket’s history arrived on the island yesterday and were officially installed at Thalang Victory Memorial Field this morning.

“These historical figures will serve to remind all Phuket people of their brave ancestors who defended the island from Burmese invaders,” he said.

The statues – each about 2.5 meters tall, cast in bronze and together costing 26 million baht – were installed at the Thalang Victory Memorial Field (map here) at 10:39am today.

“Specifically nine figures were chosen in order to honor HM King Bhumibol Adulyadej because he is the ninth king of the Chakri Dynasty,” explained Governor Maitri.

The most prominent war heroes are the sisters Thao Thepkrasattri and Thao Srisoonthorn, who defended the island against the Burmese during a five-week battle in 1785, and are already commemorated by statues at the junction of the two roads named after them: Thepkrasattri and Srisoonthorn.

Other brave ancestors who supported the two heroines and are now honored with statues are military strategist Phraya Thalang Tongpoon and one of Thao Thepkrasattri’s daughters, Mae Prang.

Two leaders of the Royal Thai Navy who helped battle the Burmese at other times are also among the nine: Phraya Yokrabut Jui and Phraya Thalang Thian, who were both sons of Thao Thepkrasattri.

The two non-military figures honored in bronze are Niam, who was the first Phuketian to work as a royal page, to Rama I, and Chao Chom Manda Thong, another one of Thao Thepkrasattri’s daughters, who became the only Phuketian consort to Rama I to bear him a daughter.

Also honored in bronze is Tongpen, a civilian who commanded the batteries of cannon fire against the invading Burmese at the fort in 1785.

“These statues will become a tourist attraction, where visitors can learn about Phuket’s historical victory,” Gov Maitri noted.

In December, Phuket Vice Governor Sommai Prijasilpa explained that a further 24 million baht is to be spent on developing the site into a tourist attraction.

“The Ministry of Tourism and Sports gave us another 24 million baht to build a car park and a fence and to decorate the area in a historic style,” she said.