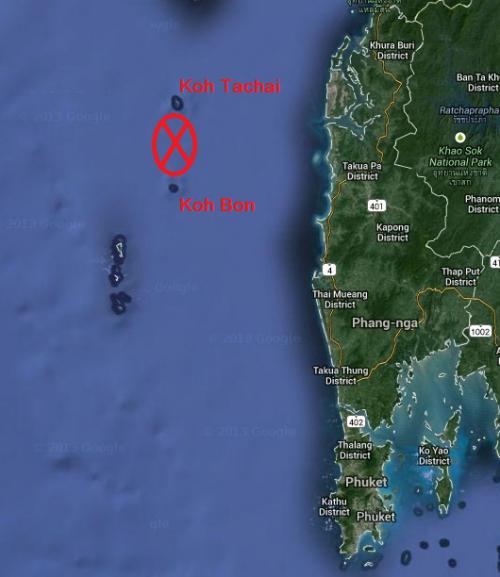 PHUKET: Liveaboard dive boat MV The Flying Carpet will remain on the sea floor, 75 meters below the Andaman Sea surface, after sinking yesterday between Koh Bon and Koh Tachai, north of Phuket.

“There will be no salvage possibility,” said the manager of Aladdin Dive Safari, the company that owned the boat.

When asked about insurance, the manager, who asked to be identified only as Frank, confirmed to the Gazette that there would be no payout.

The ship sank on a calm day near the Similan National Park after an entangled rope partially ripped its propeller out.

“It had nothing to do with the boat. We got a rope in the propeller that actually broke the propeller off, not all the way, but that’s why water came inside the boat too [fast] to pump it out,” Frank, still in shock, explained.

“There was a boat not too far away, all the people were saved. Everybody is fine ‘people-wise’. It’s just a loss on our side that the boat is gone, everything. Nobody was injured.”

First to respond to the The Flying Carpet‘s emergency was MV Peter Pan, operated by Similan Seven Sea Club.

A total of 13 people, including the ship’s captain and the crew, were rescued.

The Office Manager of the Similan Seven Sea Club, which owns the Peter Pan, confirmed that his ship and staff participated in the rescue of those on board The Flying Carpet. However, he declined to make any further comments on the incident at this time.

The captain of MV South Siam Diving 3 received notification of the sinking from Peter Pan.

“They asked us for water pumps because the [The Flying Carpet] was about to sink,” Captain Tob Sibwai told the Gazette.

“Peter Pan called for help from three vessels: South Siam Diving 3, Hor Samutr 3 and Sawan. However, when we arrived, the vessel was already gone.”

Similan National Park officers were notified of the incident at about 10am, confirmed park chief Nut Kongkasorn.

“It is outside our area of responsibility, but the safety of tourists comes first,” Mr Nut said.

“The 13 people rescued by the crew of Peter Pan were transferred to Thap Lamu Pier by about 3pm. We then transported them from the pier back to Ranong by van.”