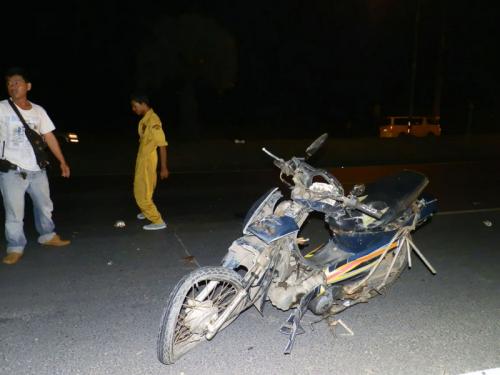 PHUKET: A Phuket Town security guard heading home from work late last night had a lucky escape from becoming another Phuket road statistic after an 18-wheeled truck and trailer obliterated his motorbike with sidecar on Phuket’s busy Thepkrasattri Road.

The truck driver did not stop at the scene.

Kitti Muongthong, 35, pulled over near the u-turn about 200 meters north of the Tah Reua Temple (map here) at about 11:45pm to answer the call of nature.

“I was heading home to Thalang after work and I pulled my saleng [motorbike with sidecar] over by the side of the road to pee,” Mr Kitti explained to Kusoldharm Foundation rescue workers at the scene.

“While I was taking a pee, the saleng rolled forward by itself into the middle of the road. Then an 18-wheeled truck came and ran straight over it.

“The truck driver kept going without even slowing down,” he added.

Mr Kitti said he could not recall the license plate number of the truck and would not be filing a complaint to the police.

“I will pay for the damage to my motorbike myself,” he said.

Phuket Gazette Exclusive: Aldhouse – A view from the inside

Phuket boob job holiday? This round’s on me