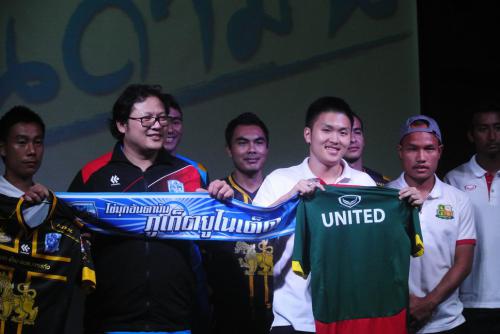 PHUKET: Get ready for one of the most exciting indoor team sports in the country – the Futsal Thailand Premier League (FTPL) kicks off this weekend, with the island’s pro five-a-side squad, Phuket United to host CAT FC in their season opener on Sunday night.

To be played at Saphan Hin’s two-year-new 4,000-seat Indoor Gymnasium, the match will kick off at 7pm. General admission is 100 baht.

This will be 7th year that Thailand has organized a professional futsal league – five-a-side indoor soccer – with this season’s 16-team league organized by Siam Multimedia or SMM.

Yesterday (February 9), the “Andaman Pearl” held a press conference at the Senses Resort overlooking Patong, formally announcing their readiness to compete in the 2014 FTPL, presenting to the media its players, staff and sponsors for the 2014 season.

The conference was presided over by Phuket Vice Governor Somkiat Sangkhaosutthirak and attended by sponsor representatives, media, fan-club members and a number of VIP sporting representatives including Phuket FC Manager Priyawit Achiriyachai, players and staff from both Phuket FC and Phuket United.

Prior to the press conference, Phuket United President Preechawut “Prap” Keesin revealed that the club’s budget for the entire season will be about 7 million baht.

Asked if the futsal schedule will clash with the football schedule, considering that both leagues commence around the same time this year, Mr Preechawut assured that both clubs are working closely together to ensure that there will be minimal if any home match scheduling conflicts.

Phuket United’s first match will be on Sunday, February 16. To kickoff at 7pm, the match will be played at Phuket’s 4,000 seat Indoor Gymnasium in Saphan Hin.

To help with match organization and training, FTPL organizers SMM have given all of the 16 teams 300,000 baht (4.8 million baht in all) in addition to 15 futsal balls per team.

Three FTPL opening matches are scheduled on Saturday, while five matches, including Phuket’s match, will take place on Sunday as follows:

Playing in the national league for the first time ever last year, Phuket United finished in an impressive fifth place, and their season goal is to finish in fifth place again, if not better.

General admission will be 100 baht, with season tickets available for only 1,300 baht, which includes admission to all 15 home matches and discounts on merchandise and match-day beverages.

One at large after drug dealers open fire on Krabi Police