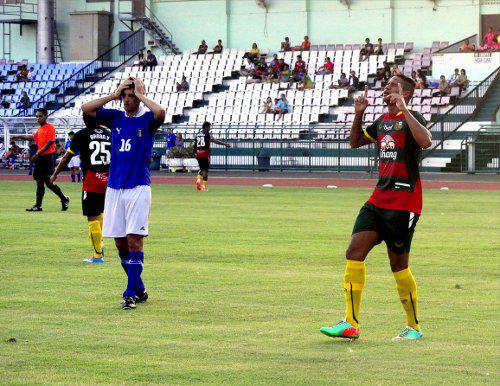 With only several scattered pockets of supporters turning out, the late Saturday afternoon match-up was a low-profile consolation match for the canceling of a Southern showdown with the TPL’s Songkhla United, initially scheduled for Sunday night.

Nonetheless, Phuket FC were careful not to underestimate their opponents, comprising of many Italians, some Frenchmen, Myanmar players and a handful of Thais.

For the third match in a row, it was Ney Fabiano to break the ice, scoring on one of his early touches, this time with his right foot, from just top of the box after charging through the line.

Phuket’s lead was soon doubled by attacking midfielder Arthit Wisetsin, with the expat-boys able to ward off numerous Phuket attacks through to the half-time whistle.

The Italian-blue clad players looked a little more confident in the second half; however, Phuket had too much to lose and prove, the pressure eased a bit after a brilliant header by defender Yusuke Sato put his side up 3-0.

But, the Pluto Ice Cream outfit (sponsored by a local business of the same name) had some fight left in them, and charged on. Their diligent efforts finally found fruition when Thai footballer, Makkan “Dew” Dongdeng penetrated Phuket’s defenses, jumping on a lovely through pass from comrade Jumroong “Noom” Kaewiet, to net the ball and bring his team back into contention, at least in theory.

Giving Ney and Eber a break in the second half, Brazilian midfielder Cristian Alex was fielded for the first time this year. Eager to shine, Cristian proved to be comfortable in his original position of midfield, skillfully feeding the ball to Eakartit Somjit, Pyne So and Anon Yangkham on the flanks.

And it would be Alex to score the next goal, chipping the ball over and out of reach of the advancing keeper. At this point, it was all Phuket who dominated the attack, eager for another goal.

Great evasive passing was exactly how the Ronins would break down their defenses for the fifth and final time of the match, when Anon easily found the back of the net from just in front of the goal line.

The 5-1 score would sustain itself through to the final whistle.

Click here for more photos and video highlights of the last three friendlies.

Looking ahead to their season opener against Pattaya United on February 22, Phuket FC have one more pre-season friendly match on the cards – next Saturday, February 15, against Southern Thai division 2 upstarts, Surat Thani FC.

That match will conclude a double-header evening for the inaugural “Phuket Superstars Soccer Championship 2014” event.

With the opening ceremony to commence at 5:30pm, the first match of the event will be contested between a VIP Phuket All Star squad and Manport Lorkloen – comprising a number of famous Thai celebrities and TV personalities.

The match will be broadcast live nationally on NBT (Thai Channel 11), and is set to kickoff at 6:50pm following a “Pom Pom Cheerleader” show courtesy of Daorung Wittaya School.

The 35-minute match will be followed by a meet-and-greet session with the celebrities, while Phuket’s friendly match with Surat Thani kicks off 7:45pm, with the night to wrap up around 9:30pm.

The Phuket Gazette is a proud media sponsor of the Phuket Superstars Soccer Championship 2014.

A portion of the net proceeds of the event will go towards local sports development and student scholarships.