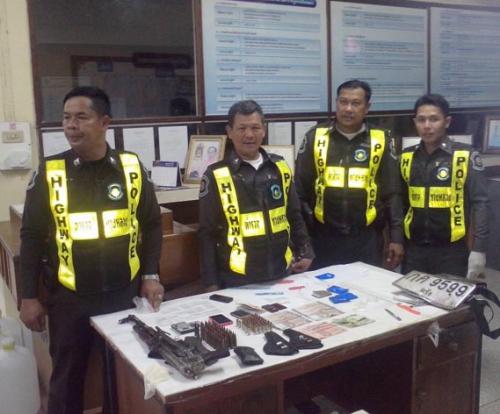 PHUKET: One suspect is still at large after a gunfight broke out between Krabi Police and two drug dealers on Saturday.

“Their car approached the Khao Phanom-Nua Khlong Road checkpoint at high speed just after midnight. We ordered them to stop, but instead of slowing down, they sped up and started shooting at officers,” Sen Sgt Maj Krit Kaewsrion said.

“Police returned fire, hitting the car’s rear tyre, which caused the driver to lose control. The vehicle flipped and crashed into a ditch.”

The gun battle raged on. Eventually, the suspects stopped shooting and officers were able to approach the vehicle.

“We arrested 29-year-old Sitthichai Krainara, who sustained serious injuries during the fight. The other suspect managed to flee the scene,” said Sen Sgt Maj Krit.

Inside the car, police found a .38 handgun, an assault rifle and ammunition for both weapons.

Also in the car were 793 ya bah (methamphetamine) pills, 361 grams of ya ice (crystal methamphetamine), over 60,000 baht in cash, two mobile phones and a book with a list of suspected customers.

Mr Sitthichai was charged with attempting to kill a police officer, possession of a war weapon and corresponding ammunition, illegal possession of firearms, resisting arrest and possession of Category 1 Drugs with intent to sell.

“He was taken to Krabi Hospital for treatment. We are still searching for the other suspect,” Sen Sgt Maj Krit added.