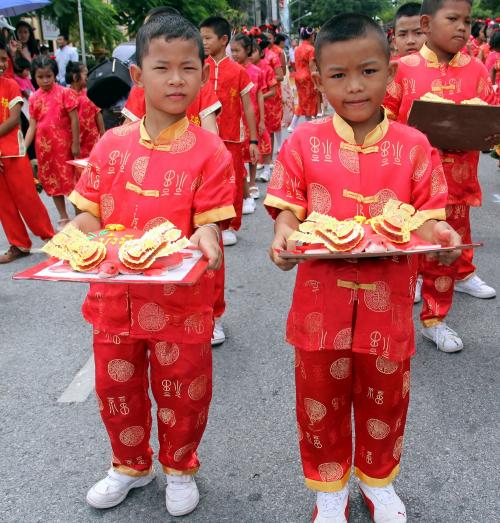 More commonly known as the Festival of the Hungry Ghosts across Asia’s Chinese communities, the festival comprises a variety of cultural displays and activities.

“The Por Tor festival is an annual festival here in Phuket, and this year will be held during August 23-24. The Chinese believe that the spirits of their ancestors will return back for one month in the ninth month of the Chinese calendar,” explained Phuket City Deputy Mayor Kawee Tansukatanon.

The festival’s opening was attended by local government officials, students and tourists, altogether totaling about 300 people.

The event featured a variety of festive foods, such as red turtle-shaped Chinese sweets called Tau-Ku and decoratively carved fruits, because, as Mr Kawee explained, “Por Tor festival-goers show their respect to their ancestors through special celebratory foods and snacks.”

The Deputy Mayor said, “Phuket City Municipality and TAT pay attention to preserving worthy festivals and renewing old cultures which younger generations might start to forget, if not for the key heritage events that we promote every year.”

Nigerian arrested in Phuket with visa stolen from Malaysia, cocaine