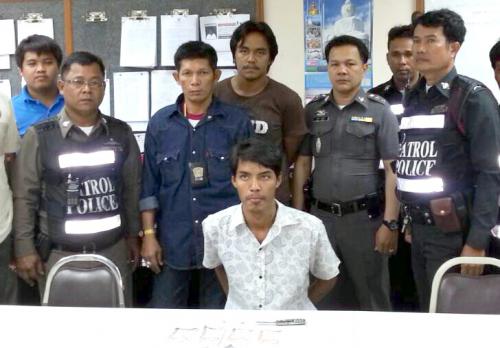 PHUKET: Two men sitting in front of their house drinking in the early hours this morning made a citizen’s arrest, taking down a man who had just robbed a Phuket Town convenience store at knifepoint.

Phuket City Police were notified of the arrest at 3:40am.

“By the time we arrived, Ronnarit Klinchuen, 21, and his friend Ponlawat Kaensub, 22, had caught the robber,” Wichai Kongkawai of the Phuket City Police told the Phuket Gazette.

“Naruecha Wongponthong, 22, from Nakhon Sri Thammarat, still had the 4,000 baht cash he had stolen from the cashier in his hand. We also found a switchblade in the left pocket of his jeans,” Capt Wichai added.

From their vantage point across the road, pals Mr Ronnarit and Mr Ponlawat saw Mr Naruecha pull up on a motorbike outside the SuperCheap 24 convenience store opposite Samkong Shrine on Yaowarat Rd (map here).

Unfortunately for Mr Naruecha, Mr Ponlawat is a community police volunteer, trained and registered under the Crime Suppression Division branch in Phuket.

“They saw him enter the store, and through the window they could see him threaten the cashier with a knife,” Capt Wichai said.

“When they realized it was a robbery, they crossed the road and pounced on him as he walked out of the store,” he added.