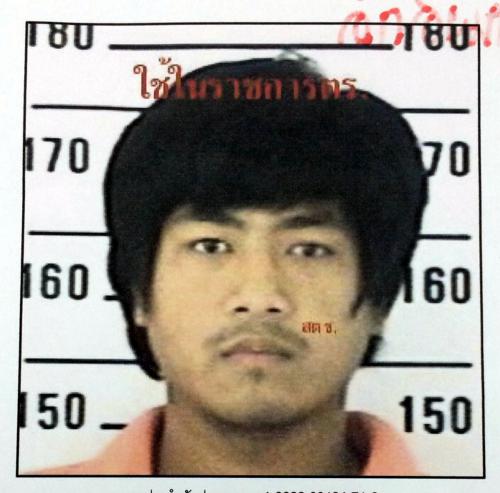 PHUKET: In a cascading string of confessions, police arrested five drug dealers on Saturday, collecting along the way over a kilogram of ya ice (crystal methamphetamine) and almost 4,000 ya bah (methamphetamine) pills.

The first arrests that started the domino effect were at Suan Luang Park (Rama IX Park) (map here) when police noticed a man and a woman acting suspiciously in front of the park. Police asked to search them and found 10 ya bah pills packed in a drinking straw on Kanshit Leujai, 33, and another 10 ya bah pills in a straw on Passarawan Udom, 39.

When questioned, Mr Kanshit and Ms Passarawan gave police information which enabled them to find Ekkawut Rueanpetch, 22, in front of the toilets at the PTT gas station in Koh Kaew.

When Mr Ekkawut saw the police, he threw a plastic bag wrapped in newspaper on the floor and ran away. Police were faster, and caught him. The bag contained 92.5 grams of ya ice.

Questioned by police, Mr Ekkawut revealed the whereabouts of two more dealers and the address of a house where drugs were stored.

Police went to Pruksa Ville housing estate behind Thalang Hospital, where they found Kiettirat Maliwan, 34, and Jakkrit Nuanjit, 22. A search of the premises turned up a one kilogram block of ya ice that had been packed in a tea package, put in a box, covered in tape, put in a plastic bag and concealed in an empty paint bucket which was in turn hidden under a black bucket, Lt Col Prawit said.

Hidden in the wall of yet another house, in Thepkrasattri subdistrict, police found 3,960 ya bah pills.

“All of the suspects were charged with possession of a Category 1 drug with intent to sell. Two of them, Mr Kiettirat and Mr Jakkrit, were transferred to Thalang police for further investigation as they were arrested in Thalang,” he said