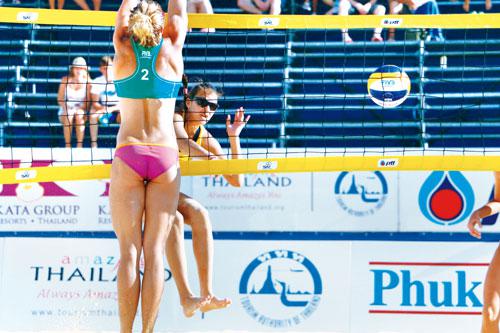 PHUKET: A winding year of the snake, 2013 had its ups and downs – but mostly ups. Following are several Phuket Gazette editors’ picks for this year’s top local sporting events, moments and milestones.

Phuket’s result of the GMM Sport Thailand Futsal Premier League (TFPL) 2012-2013 season closer was in contrast to their season debut in which they were defeated by the same team on the same pitch – the victory was the Andaman Pearl’s seventh in a row, and ensured that they met their initial season goal of being one of the top five teams of the league.

A hat-trick by Phuket’s top scorer Jackson Santos brought the Brazilian winger’s season tally to 36 goals, making him the runner up for golden boot, which was won by Si Saket’s star Brazilian Ramualdo Namorato (39 goals).

Despite his stellar performance for the club, the young Brazilian did not re-sign with Phuket for the 2014 season which will commence in January, 2014.

Winds gusting to 20 knots made for a perfect end to what was perhaps the best Cape Panwa Hotel Phuket Raceweek regatta yet. The weather conditions delivered fast and exciting racing throughout the event, leaving the sailors of more than 15 nationalities tired but happy.

Wan Ma Rang in IRC Racing I, improved throughout, had their best racing on the final day closing out the regatta with two second places. However, it wasn’t enough to overhaul Katsu, who sailed consistently well to hold onto second place by three points.

Class honors went to Australian Peter Ahern and his all-star crew on Oi!, who with seven wins from eight races, were untouchable.

IRC Racing II was dominated by fellow Australian Peter Sorensen and his crew on Fujin, and that domination continued through to the final race. Eight wins from eight races speaks for itself and as sailing star Steve McConaghy, who was racing on-board the former Ichi Ban, said, “You could sail this thing backwards and still win.”

The battle, however, was for second and third in the class, between Stuart Williamson’s Skandia Endeavour of Whitby and Neils Degenkolw’s Phoenix. Despite struggling with their starts and being called OCS on more than one occasion, a good performance on the final day for Williamson and his crew (a 2,3 scoreline), saw them secure second overall and relegate Phoenix to third.

While the Aussies took home a lot of silverware at this year’s regatta, what was noticeable is the large number of top boats from Ao Chalong Yacht Club, both winners and high scoring performers.

At the event’s closing, Media Business Services (MBS), led by Byron and Kanyarat Jones, were announced as the new owners and rights holders of the Cape Panwa Hotel Phuket Raceweek.

Founder and now former rights holder Grenville Fordham of Image Asia Events made the handover official in front of 500 sailors, VIPs, guests and the media attending the final Gala Dinner.

For full results in all classes, visit phuketraceweek.com.

It took just two sets for the Chinese team, Chen Xue and Xinyi Xia to beat the American pair Emily Day and Summer Ross and win the gold medal in the FIVB Phuket Thailand Open Powered By PTT 2013.

The Americans failed to crack the great Chinese wall despite numerous attempts and the high flying, petite Xinyi Xia’s precise blows earned her team precious points and loud applause from the audience.

In the match for third place, the Salgado sisters (Maria-Clara/Carolina) beat their fellow Brazilians, – Maria Antonelli and Agatha Bednarczuk.

Playing in their third consecutive year in Thailand’s second-tier pro football league – Yamaha League One (YL1) – the Phuket FC “Islanders” ended the 2013 season on a low note, falling to their final position of 12th place following a 3-0 away loss in Thailand’s Northeast to Nakhon Ratchasima FC on November 2.

In other YL1 season finales, Singtharua FC secured their ticket back to the Thai Premier League with a final tally of 65 points following a 2-1 win over Airforce AVA FC, who had already secured promotion as league champions with 69 points.

The third team earning their place in the elite league next season was PTT Rayong with 63 points following their 2-2 draw to Bangkok FC who just missed out, finishing fourth with 61 points.

The other two Rayong-based teams competing in YL1 2013 – Rayong FC and Rayong United – also bid farewell to the YL1 after they were relegated as the two bottom-of-the-table teams. Since the number of teams to compete in both the TPL and YL1 next season will increase to 20 per league, only one team got relegated from the TPL to the YL1 – Pattaya United.

The Islanders endured yet another mid-season trajectory change when Thai ex-Head Coach Paniphon “Tu” Kerdyaem posted his resignation on Facebook on August 4.

Having joined the club at the start of the season, Coach Tu’s record of six wins, 11 draws and three losses, coupled with a cup record of two wins and two losses was relatively decent when compared to the combined record of the previous handful of coaches that have passed through the last two seasons.

Although Coach Tu’s successor – Brazilian, Stefano “Teco” Cugurra – started off his tenure with a 2-0 home victory over Nakhon Pathom on August 11, he would not see victory again until October 6 (1-0 over Saraburi FC).

In his 14 matches in charge so far, the 39-year-old coach has won two, drawn four and lost eight. Despite this unimpressive record, he still has his job and was given a clean-slate to prove his skills.

Club Chairman Pamuke Achiriyachai justified his decision: “Teco joined midway through the season and had to work with what the old coaching team left him, so it’s not fair to measure him on this alone. We want to give him a chance to show what he can do… He’ll have the first three games to prove himself.”

As part of his 2014 strategy, the coach has allocated four of his roster’s six quota spots for foreign players to his own countrymen; three of the Brazilians – midfielder Cristian Alex (returning from last season), defender Tales Dos Santos and midfielder Eber Henrique – were introduced to media, while the fourth one has yet to be confirmed. The other two spots are for Japanese defender Yusuke Sato and an as-of-yet unconfirmed Myanmar national.

All in, Phuket FC retained only nine