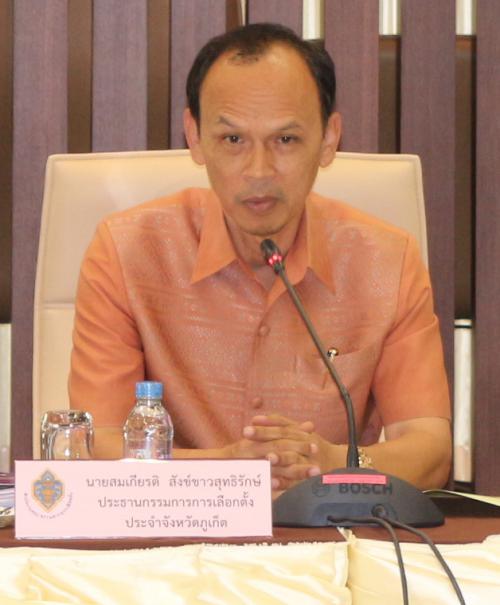 PHUKET: Phuket Vice Governor Somkiet Sangkaosuttirak has called on the police and the Royal Thai Navy to protect candidates enrolling in the national Member of Parliament (MP) election scheduled for February 2.

“We have to accept that the current situation [in Bangkok] is not stable, and we need to be prepared,” Vice Governor Somkiet said, referring to the violence yesterday in which one policeman was killed and more than 100 others injured (story here).

Enrollment of MP candidates will take place at Phuket Provincial Community Hall from from 8:30am to 3pm tomorrow through January 1.

“I would like the police and the navy to guard the hall,” V/Gov Somkiet said. “We have also prepared a backup location in case something unexpected happens.”

However, he declined to name the location of the “backup enrollment venue”.

The dissolution of Yingluck Shinawatra’s government on December 9 (story here) necessitates the current election. National MP elections are normally held every four years; the last was in July 2011.

“The election date is set for February 2 from 8am to 3pm. Here in Phuket we have 364,059 people registered to vote. Electorate 1 will cast their ballots at Phuket Municipality Hall and Electorate 2 at Kathu Wittaya School and Muang Thalang School,” said V/Gov Somkiet.

Early voting will be on January 26 from 8am to 3pm at Community Hall, he added.