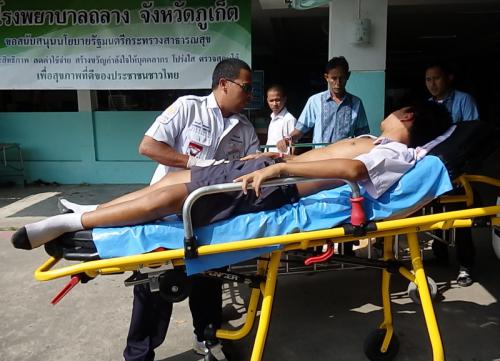 PHUKET: A senior high school student is in hospital after being stabbed yesterday afternoon as he left school in Thalang, in central Phuket.

Kusoldharm Foundation rescue workers were called to the Muang Thalang School (map here) at 2:30pm and found the youth with a chest wound.

“He had been stabbed once in the chest with a long, thin, sharp object that looked like a woodworking tool,” said a rescue worker called to the scene.

“We rushed him to Thalang Hospital,” he added.

Friends of the youth – whose name is being withheld because he is a minor – told rescue workers that they had just finished an exam and were headed to their motorbikes when six teenagers arrived on two motorbikes.

“They attacked him,” said one friend. “I shouted for help and they rode off. We ran to our friend and saw he had been stabbed, and called our teachers.

“I don’t know their names, but I think they are teenagers from Baan Muang Mai that we don’t get along with,” he added.

Staff at Thalang Hospital confirmed that the student was still receiving treatment for his injury, but was out of danger.