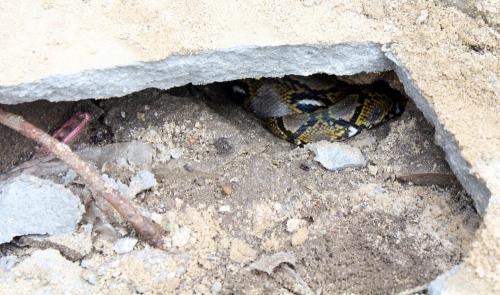 PHUKET: Construction workers breaking the floor of a new house in order to remake it were shocked when instead of earth they saw the tail of a snake through the broken concrete.

Kusoldharm foundation workers who were called to the site on Palien Road (map here), behind Provincial Hall this morning managed to capture the snake on their second attempt.

“I tried pulling it by its tail, but it got away,” said rescue worker Wirat Silarak. “But then it stuck its head out and I rushed to grab it and pull it out.”

Following standard procedure, the two-meter long python was bagged and released into the wild.