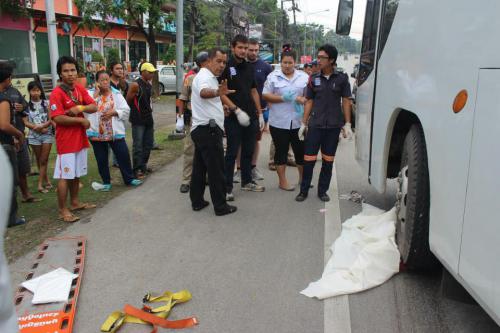 One of the three teens died instantly in the impact. The other two are in hospital.

Police arrived at the scene, on the southbound lane near the intersection with Sai Yuan Road (map here), at about 4pm.

“According to witnesses, the three boys were riding home to Rawai after their Thai boxing class in Chalong,” said Lt Cholada Chokdeesrijan of Chalong Police.

“The motorbike and bus were travelling in the same direction. As they both approached the Sai Yuan Road intersection, the motorbike crossed from the left side of the road into the central lane as if the boys wanted to turn right into Sai Yuan Road – but they crossed directly into the path of the bus.

“One of the boys died instantly from head and chest injuries. The other two were thrown clear. They are now recovering at Vachira Phuket Hospital,” Lt Cholada told the Phuket Gazette.

Police at the scene declined to reveal the names of any of the victims.

“He was afraid that relatives of the dead boy or other people at the scene would attack him, so he took a taxi to surrender himself at the police station,” Lt Cholada explained.

Mr Wicharn was charged with reckless driving causing death and later released on an undisclosed amount of bail.

“We have yet to close our investigation. We still have more questions for the two survivors, the driver and witnesses,” Lt Cholada said.