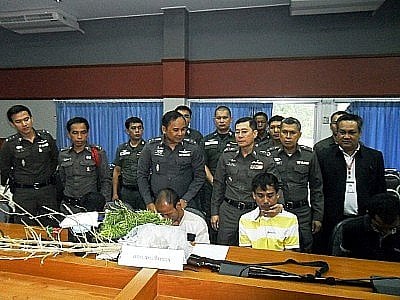 PHUKET: A local politician and two other men have been arrested and charged with possession and sale of narcotics after a raid on their jungle hangout in Phuket yesterday.

All are listed as residents of Cherng Talay.

Mr Nakhin confessed to drugs and weapons charges, while the other two men denied them.

Seized as evidence in the case were 310 grams of heroin, three kilograms of dried marijuana, a 9mm handgun and a rifle.

Also seized were 10 krathom plants growing outside the hilltop retreat at the time of the arrest, and a wide variety of drug-taking paraphernalia found inside the house.

The raid by a provincial drug suppression unit followed the arrest on Thursday of Udom Rattnomanee, listed as a 34-year-old resident of Nakhon Sri Thammarat but living in Cherng Talay.

Arrested after selling 24 grams of heroin to an undercover police officer from the same unit, Mr Udom was found in possession of a 9mm pistol.

A search of his home uncovered more heroin as well as ya ice (crystal methamphetamine).

During questioning by police, he identified Mr Nakhin as his supplier and led them to his jungle retreat in Cherng Talay Village 1.

The arrest of a local politician was the second in less than a year in Phuket.

In October last year, Kathu Deputy Mayor Somkuan Somboon was arrested by police in a 4am roadside sting operation after other drug dealers identified him as their supplier.