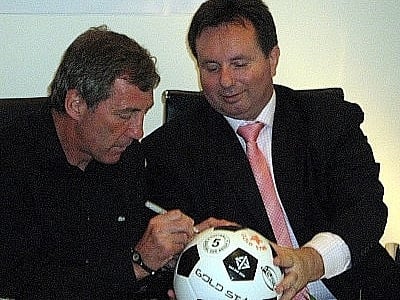 PHUKET: The Phuket Gazette this morning confirmed that the inaugural match of the Football Legends Tour – in which the Liverpool Legends squad will take on the Legends of Thailand team – will be held in Phuket.

Gates open at 3pm for a 6pm kickoff.

The event is sponsored by the Phuket Gazette and hosted by the TSLC.

The second and deciding leg will kick off at 7pm on Wednesday, October 5 at Supachalasai Stadium in Bangkok.

“The date change is worthwhile as it allows us to invite even more famous former Liverpool football stars to Thailand to play in the matches,” said Cris Rosenbergs, Director of North Scoreboard and owner and creator of the Football Legends concept.

The Liverpool Legends squad is expected to include Anfield heroes such as John Barnes, Ian Rush, Vladimir Smicer as well as Patrick Berger and Steve McManaman.

Robbie Fowler and Sami Hyypia are also in the line-up, both only recently having hung up their professional boots.

Two-time European Cup winner Alan Kennedy has taken the role of Tour Manager and will spend the next few months preparing his team and promoting the week-long event.

“The Football Legends Tour is a great concept and I know the former Liverpool players are excited about to coming to Thailand to play,” he said.

“I’m sure the two friendlies will be great spectator events and that we are able to support the local community and the Phuket Youth Football Home Foundation through this event is fantastic,” he added.

Thailand’s formidable challengers will be managed by the legendary Piyapong Pue-on and coached by Kiatisak Senamuang, also known as “Zico” – two of the most famous footballers ever to play for the Thailand’s “War Elephants”.

“This is a great opportunity to help a worthy cause and enjoy some great football,” Piyapong told the Gazette.

The eight-day tour includes a series of events, public appearances and football clinics in Phuket and Bangkok, with the tour raising funds for the Phuket Youth Football Home Foundation.

Both games will be aired live on TrueVisions’ TrueSport 2 channel as the media broadcasting partner for the tour.

The tour schedule is as follows:

Gazette readers will have the opportunity to win VIP tickets for the Phuket match over the next four months by trying their luck in the weekly ‘Do you know Phuket?’ contest on this website. See link toward the top of the right margin of this page as well as the site’s other main pages.