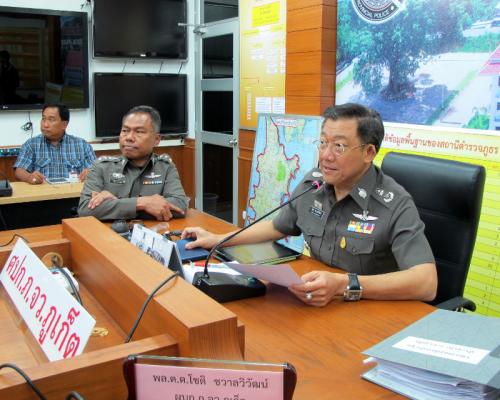 PHUKET: Phuket’s top-ranking police officer Maj Gen Choti Chavalviwat called a press conference yesterday to announce that he has ordered an investigation into the posting of a YouTube video which he says damages the image of Phuket and Thailand

The 2.16 minute video (click here) shows a Thai man using a gun to threaten a Russian man, kick him once and repeatedly slap him.

“The fact is, this happened because of a personal conflict,” said Gen Choti. “It was not a random attack. It happened a while ago; the Thai man confessed and he is expected to be sentenced on July 12,” he said.

“I don’t know exactly what the person who posted this on YouTube was thinking,” said Gen Choti.

“A video like this could hurt the relationship between Thais and Russians, and Thais and other nationalities too.”

Gen Choti said he had assigned Phuket Provincial Police Deputy Commander Arun Kaewvatee to determine if any “hidden motive” was behind the posting of the video.

“Our first step is to contact the High Tech Crime Unit in Bangkok,” Col Arun told the Phuket Gazette.

The Russian man in the video, Vasiln Tubaev, 26, arrived on Phuket on April 5 and was attacked in his room at PN Mansion in Rassada on June 6, said Gen Choti.

The suspect, 37-year-old Patchara Utsaha, lived in the same building. He confessed to the attack, saying he was angry because Mr Tubaev went with his girlfriend, Wilaiwan Kengdiaw, 21, on a trip to Khao Lak.

In the video, Mr Patchara stands at the entrance to Mr Tubaev’s room holding what appears to be a gun. Mr Tubaev kneels in front of him with his back to the camera as Mr Patchara threatens him with the gun and slaps him in the face several times.

Among other things he says, “You know she girlfriend [points to self]. “You know.” “Karn is my wife.” “You go back Russia.”

The incident happened on June 6, Phuket City Police received the complaint on June 9 and arrested the suspect on June 12. The YouTube video was posted on June 18.

By 11:15am today, the video had received 145,127 hits, almost double the number it had 24 hours earlier, when the story was first posted online.

“We try our best to serve and protect the people of Phuket, both Thais and foreigners. I do not want our reputation to be destroyed by such a video,” Gen Choti stated.

“Please be informed that we take every case seriously, especially those that involve foreigners… We searched Mr Patchara’s room and found a replica gun. Mr Patchara has been charged with breaking another person’s property, assault and deprivation of liberty.

“I would like to ask the press to present what we have done and what the truth is,” he said.

“This is about a man who made a mistake and he is paying the price. I would like to ask everyone to understand the situation and to understand that we have done our job. We do not want tourists to think that this is a normal thing for Thai people to do,” he added.

Can Phuket host an F1 race?