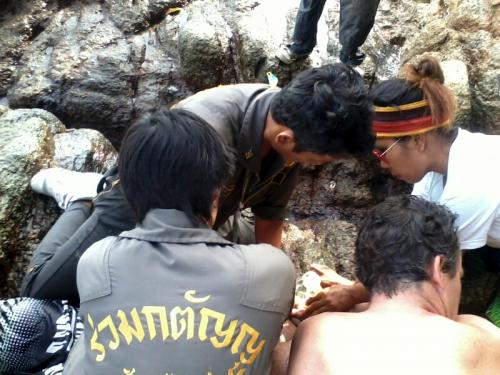 PHUKET: Two tourists drowned within half an hour of each other yesterday on the west coast of Phuket.

In both cases, red warning flags had been posted on the beaches.

Belgian Laurent Jacques Leopold Wanter, 43, was pulled from the surf at Laem Sing Beach, north of Patong at 3:30pm.

Despite efforts by lifeguards to resuscitate him, Mr Wanter was pronounced dead minutes later.

He had been swimming with his wife when the couple were overpowered by waves.

“My husband and I were swimming. Big waves came and we were dragged further out to sea. We were frightened. We screamed for help. I was rescued, but my husband was pulled out of the water unconscious,” Ms Wanter said.

“My brother and I went swimming at about 4pm. I swam out to deeper water, but Aleksandr was playing in water that was only knee deep,” Aleksandr’s older brother told police through a translator.

“I saw a big wave hit him and he disappeared,” Mr Poleshchenko said

“I screamed for help from beach guards. They got his body, but he was already gone,” he said.

The Poleshchenko brothers were scheduled to fly back to Russia today.