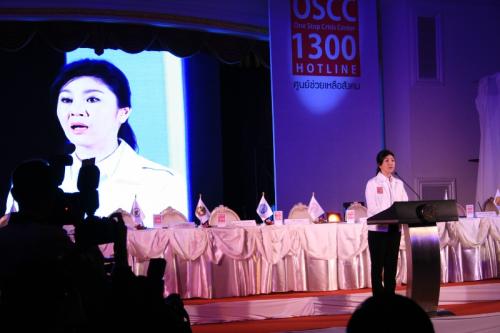 
Divorce, domestic abuse on the rise in Thailand
The Nation / Phuket Gazette

PHUKET: The rate of divorce in Thailand has tripled from 10.8 per cent in 2009 to 33 per cent in 2012, while domestic violence has been recorded in at least a third of Thai families.

The 2012 survey found that 61 per cent of the families had at least one member with a drinking problem, Wimontip said, adding that gambling was also a growing issue among families. More were found waging money on lottery (58.6 per cent) or betting on other things (40 per cent) compared to the 2010 figures of 52.6 per cent and 19 per cent respectively. While over 80 per cent of the respondents said their families earned enough to take care of themselves and have some savings, families with children under the age of 22 or senior citizens were seeing a 10-per-cent rise in debts.

Although the survey found that family members communicated more, domestic violence continued to rise, with 30.8 per cent of the households reporting abuse in 2012, she said.

Many of the families reporting domestic violence had at least one member addicted to gambling, she said. Spousal cheating has also increased, hence the rise in the rate of divorce.

“The family situation in Thailand is fragile due to risky behaviour related to vices, like alcoholism and gambling. Plus, more elderly people are being left home alone,” she said.