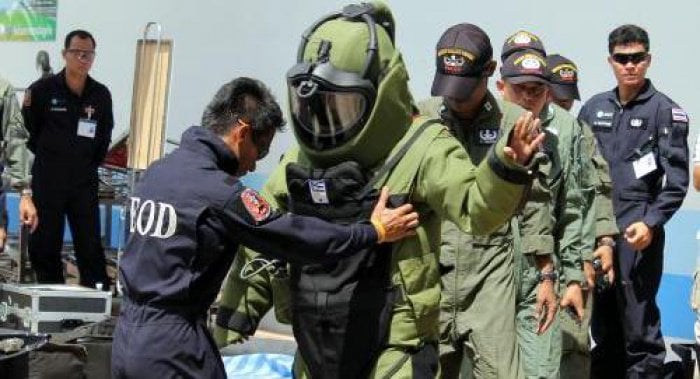 PHUKET: A Phuket top cop has confirmed that he will boost security measures on the island following a car bomb exploding on the resort island of Koh Samui last night.

“In short, we will strengthen our security measures and keep a closer eye on tourist locations, as well as areas where the public generally gathers,” Phuket Provincial Police Deputy Commander Peerayuth Karajedee told the Phuket Gazette today. “However, it is important to remember that nothing like this has happened in Phuket, and that there is no reason to panic.”

Four Thais and one foreigner were injured when the car bomb detonated in the underground parking area at Central Festival Samui. Two witnesses to the bombing fainted following the explosion (story here).

Phuket Governor Nisit Jansomwong told the Gazette that Phuket would not “stand still” after the incident in Koh Samui, as the two have many similarities as popular tourist islands.

“We have already strengthened our forces on the island ahead of Songkran, especially in tourist areas.”

Vice Governor Somkiet Sangkaosuttirak explained to the Gazette that the boost in security measures would not include more boots on the ground.

“Actually, we are already well prepared because of Songkran. However, we will increase our vigilance during vehicle checks,” Vice Governor Somkiet said. “We will do our best to keep everyone safe.”

Though extra officers aren’t being added to island patrols following the explosion, Central Festival Phuket has increased its security-staff numbers in the car park, and boosted general security.

“We added more security staff at the car park, and I ordered the staff to keep a closer eye on cars entering the mall. They are required to check the bottom of all cars before letting them into the underground parking area,” Wilaiporn Pitimanaaree, general manager of Central Festival Phuket, told the Gazette. “The increased security measures were implemented last night.”

As an additional measure, Mr Wilaiporn had all cars cleared from the parking area after the mall closed last night.

“As for the building, we already have screening machines at the entrances, so we will continue to be vigilant at those locations,” he said.

“We will be staying in close contact with local police and monitoring the situation to ensure that everyone feels safe when they visit our shopping center.”