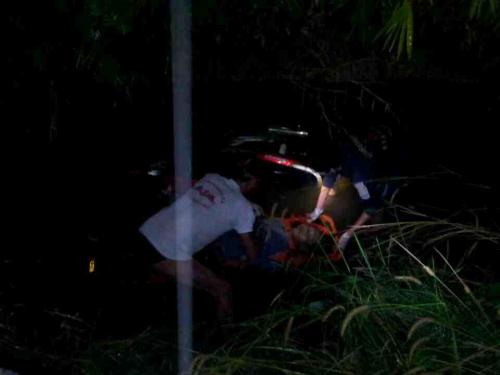 PHUKET: Police are trying to identify a man who died in a high-speed motorbike accident in Koh Kaew, north of Phuket Town, early this morning.

Police were called to the scene, near the entrance of the Inizio Koh Kaew housing estate (map here), after security guard Chamroen Pinamorn witnessed the accident at about 4am.

“I saw a man speed by on a motorbike heading toward Thepkrasattri Road. He lost control at the curve and went into a roadside ditch,” Mr Chamroen said.

“The road was wet from the heavy rain last night, and the ditch is about three meters deep,” he added.

Mr Chamroen called other security guards to rush to help the fallen motorcyclist.

“But when we climbed into the ditch, the man was unconscious and not breathing,” he said.

Lt Jariyawat Pancheun of the Phuket City Police described the man as 150-160cm tall, about 30 years old, and dressed in a light gray sports t-shirt and dark gray jeans at the time of the accident.

“There were no tattoos or other distinguishing marks on the body and we found no identification documents,” he said.

“We found a Nokia phone on him, but it was no longer working as it had been submerged in the water in the bottom on the ditch,” Lt Jariyawat said.

No helmet was found at the scene, he added.

“We are waiting for test results to establish whether the man was drunk. Any person who believes he knows who this man was is urged to contact the Phuket City Police on 076-212129,” Lt Jariyawat said.