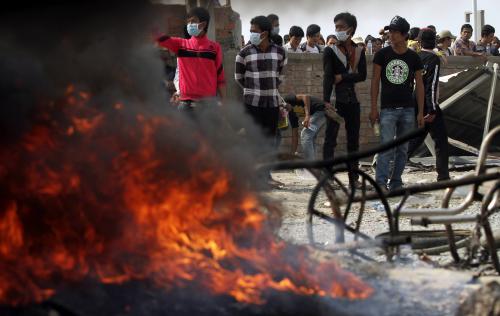 Chaos during nationwide strikes erupted for a second day as security forces were deployed to break up the demonstration by thousands of workers, who refused to move and threw bottles, stones and petrol bombs outside a factory in Phnom Penh.

The clash represents an escalation of a political crisis in Cambodia, where striking workers and anti-government protesters have come together in a loose movement led by the opposition Cambodia National Rescue Party (CNRP).

Unions representing disgruntled garment workers have joined opposition supporters protesting against the government of Prime Minister Hun Sen to demand a re-run of an election in July that the opposition says was rigged.

Two witnesses said they had seen at least three dead bodies during the chaos. Military police spokesman Kheng Tito, however, said only one protester was killed.

“We are sorry we heard one was killed and some were injured,” he said. “But we were just following our duty, role and tasks. Now, we are securing the situation.”

It followed a similar crackdown on Thursday in another part of the city, when armed troops struck demonstrators with batons. Witnesses said at least 20 people were wounded.

“If violence continues to happen and there are no talks, more violence will break out,” said Chheng Sophors of the human rights group Licardo. “Protesters have become angry.”

The CNRP, led by former finance minister Sam Rainsy, has courted some 350,000 garment workers from nearly 500 factories across the country by promising to nearly double the monthly minimum wage to $160 if it wins a re-run of the July election, which Hun Sen is refusing to hold.

The opposition alleges 2.3 million of its votes were stolen to allow the ruling Cambodia People’s Party (CPP) to return to office. The CPP won 68 seats in the election to the CNRP’s 55, according to the National Election Committee, but the CNRP says the commission is one of many agencies under CPP influence.

The government is refusing to raise the wage beyond $100 dollars a month and has ordered factories to reopen to prevent damage and job losses in an industry worth $5 billion a year to what is one of the world’s poorest countries.

Until this week, security forces had exercised restraint to try to cool tempers as pressure mounted on a government facing some of the biggest protests ever seen in Cambodia.

The strikes and rallies represent a rare challenge to the 28-year rule of Hun Sen, who has been credited with attracting investment and creating jobs in what was once a failed state scarred by war and the bloody 1970s Khmer Rouge era.

He has also earned a reputation for being intolerant of opposition and rights groups say abuses are common.

Hun Sen’s rule was tested last year when a once weak opposition of various parties amalgamated and won votes from Cambodians upset by low wages, graft and a substantial number of forced evictions from farmland and city slums.

Garment manufacturing is Cambodia’s biggest foreign currency earner, a major employer and a vital source of income for many rural families who complain they can barely survive on the wages that are lower than neighbouring Thailand and Vietnam.

Big brands like Gap Adidas, Nike and Puma outsource footwear and apparel to Cambodian factories, in part due to the cheaper labour costs than China.

Navy helicopters spotted four overcrowded boats struggling to stay afloat south of Sicily on Thursday and ships were sent to save them, the navy said in a statement.

The 823 men, women and children aboard the four vessels were from countries including Egypt, Pakistan, Iraq and Tunisia.

The navy rescued 233 migrants from Eritrea, Nigeria, Somalia, Zambia, Mali and Pakistan in a separate operation and took them to a port near Syracuse on Sicily’s eastern coast.

Following an October shipwreck in which 366 Eritrean migrants drowned off the Italian island of Lampedusa, Italy launched a special operation combining ships, helicopters and drones to monitor the Mediterranean Sea.

Italy is a major gateway into Europe for many migrants seeking a better life, and sea arrivals to the country from Northern Africa more than tripled in 2013, fuelled by refugees in Syria’s civil war and strife in the Horn of Africa.

Over the past two decades, Italy, Greece and the Mediterranean island of Malta have the brunt of the migrant flows and have urged a coordinated European Union response.

A flare-up in violence between Muslim fighters and Christian militias has displaced more than 200,000 people in the past few weeks alone, leaving a total of 935,000 homeless.

A Muslim rebel group, the Seleka, unleashed a wave of killing and looting after seizing power in March, and the deployment of 1,600 French and nearly 4,000 African Union peacekeepers has done little to contain the tit-for-tat violence between religious communities.

In the riverside capital alone, more than 510,000 people are displaced – equivalent to more than half the city’s population, UNHCR said. Just over half of them are children.

The number of people sheltering at a makeshift camp at the international airport has doubled in the past week to 100,000. The site lacks proper access to food or water but access for humanitarian groups has been restricted by fierce fighting in nearby neighbourhoods.

“Insecurity and chaos around the site…prevents us from doing any distribution,” UNHCR spokesman Babar Baloch told a news conference in Geneva. “It’s a horrible situation. We have heard a lot about revenge attacks happening inside health centres, where armed elements have gone and attacked patients.”

Medical charity Medecins Sans Frontieres said it was cutting services to a minimum at its airport clinic after stray bullets killed three children and injured 40 people this week.

“We are not going to continue to put the lives of our personnel at risk,” Lindis Hurum, its coordinator at the site, told Reuters. “A team composed of five of our 16 doctors will be left in place for cases of extreme emergency.”< — Phuket Gazette Editors