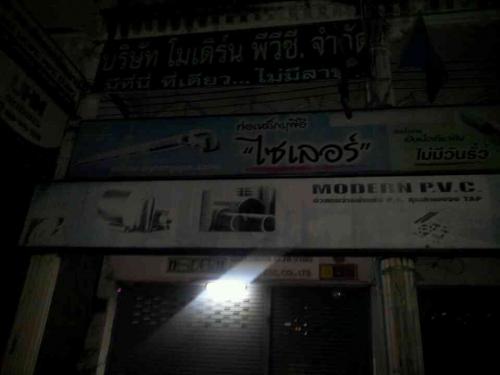 PHUKET: A family of three were rescued from a burning building after being trapped by an electrical fire in their bedroom above the family shop in Phuket Town late last night.

Police and firefighters, along with three fire trucks, were called to the Modern PVC plumbing supplies store on Mae Luan Road at about 11:40pm.

“When we arrived, we could see flames and smoke pouring out of the building,” said Lt Col Chaliao Thaihoo of the Phuket City Police.

Firefighters split into two teams: one to start attacking the blaze, the other to ensure the family were safely out of the building.

“It took the fire team 20 minutes to extinguish the blaze,” Col Chaliao said.

The other team of firefighters entered the building to rescue the family, who had become trapped by the flames.

Anucha Thanphrapasorn, 50, told the Phuket Gazette that he woke to the smell of burning.

“We woke up to see the portable fan on the dresser on fire,” he explained.

“Smoke started filling the bedroom, so I grabbed a fire extinguisher that we keep in the house and tried to put out the flames – but I couldn’t stop the fire from spreading,” Mr Anucha said.

Firefighters confirmed that evidence at the scene indicated the fire was started by a short circuit in the fan.

However, a little confused, Mr Anucha confirmed, “I switched off the portable fan in the bedroom before going to sleep.”

Regardless, Col Chaliao confirmed that a team of forensics investigators will be called in to confirm what started the fire.