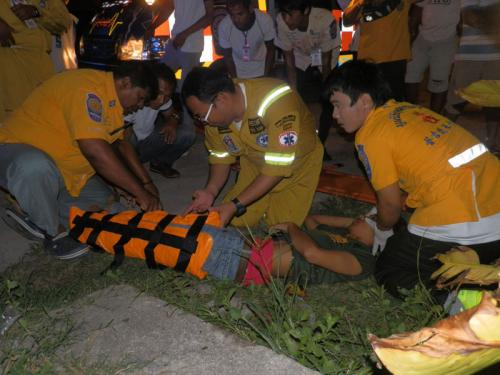 Correction: The original story yesterday named the driver, as repeatedly confirmed and spelled out to our reporters by Thalang Police Sub Lt Niphon Temsang, as “Martin Ian Potter”. His reports of the surname were incorrect. The driver charged over the incident was Martin Ian Foster, who reportedly works in the hotel industry on Koh Maphrao.

The Gazette obtained the correction today when responsible police officers at Thalang Police Station allowed our reporters to finally sight the charge sheet, a request which had been denied by Sub Lt Niphon.

Sub Lt Niphon was not available today for comment.

PHUKET: A British expat involved in a collision with a motorbike on Friday night had to be extricated from the scene by police after local residents reacted angrily over the incident, the Phuket Gazette has been told.

“He was standing and swearing in Thai and English,” Sub Lt Niphon said.

“Not far from Mr Foster*, we found his white Toyota car and a Honda Wave motorcycle still stuck under the front of the car. There were marks on the road showing the motorcycle was dragged into the street after being hit,” he added.

Witnesses reported to police that Mr Foster was driving at speed when he entered the street.

“They said it seemed like Mr Foster* was trying to flee the scene, that was why he tried driving away with the motorcycle still stuck under the front of his car,” Sub Lt Niphon said.

“They were angry and some of them even tried to hit him, so we had to take Mr Foster* to Cherng Talay Police Station in order to continue questioning him over the incident,” he added.

“We could smell alcohol on him,” Sub Lt Niphon alleged.

Mr Foster was charged with drunk driving and reckless driving causing damage to a person and property.