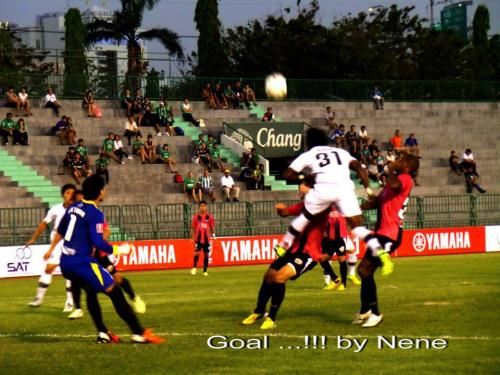 PHUKET: Kicking off the Thai Premier League (TPL) Yamaha One 2013 season, Phuket FC played their season opener out to a 1-1 draw away against Big Bang Chula United (BBCU) on Saturday evening in Bangkok.

Played at the Army Stadium, the match was watched by little more than 300 fans, with several dozen Phuket fans making the trip.

Relegated last year from the TPL, the home team were looking to seal three points with an attacking formation led by Cameroonian striker Bouba Abbo and Thai forward Pichad Abbo

In the opening exchanges possession was contested evenly by both sides, but it was Phuket who enjoyed the first real scoring chance in the 12th minute.

A free kick by Berm from the right wing looked promising, but was denied by the reflexes of BBCU’s keeper.

Phuket got another good scoring opportunity six minutes later when Chana Sonwiset drove into the penalty area and took a strike – the shot was deflected by a BBCU defender.

Pouncing on the loose ball, Berm’s follow up strike was also denied by the tight BBCU defense.

Despite the visitor’s chances, it was the home team who would activate the score board in the 20th minute.

The perfectly weighted cross floated to the far post, where Bouba headed an assist to Pichad, whose follow up was sure to find the back of the net.

Four minutes later, the home crowd were silenced, when a free-kick from Phuket defender Sakareya Kolae found teammate Chana in the middle of the penalty area.

Chana’s ensuing header diverted the ball to teammate Nenebi, who headed the ball past the keeper for the equalizer.

Both sides enjoyed a number of chances after that, and it even looked like BBCU would steal the lead with a joint attacking effort by Bouba and South Korean defender Ma Sanghoon in the 83rd minute.

However, a foul prior ensured that the score remained unchanged despite the ball hitting the back of Phuket’s net.

The home team were reduced to 10 men in the third minute of added time after a rough challenge by defender Boonyarit Pathomthad on Phuket striker Dudu.

The final whistle blew moments later and finalized the 1-1 scoreline once and for all.

BBCU manager Wirayut Pothamik commented after the match: “We did good, but couldn’t get the three points. Its regretful, as we should have had the winning goal, but instead were denied by a foul [call]. In any case, we’ve got to respect the official’s decision.”

Phuket Coach Paniphon Kerdyaem also believed his side could have – should have – won the match. “We got one point on the road, and so not all is lost. Today was a fun game and everyone on the team played their part well.

To be played at Surakul Stadium (click here for map), the match will kick off at 6:30pm.

Other Thailand football results this weekend: