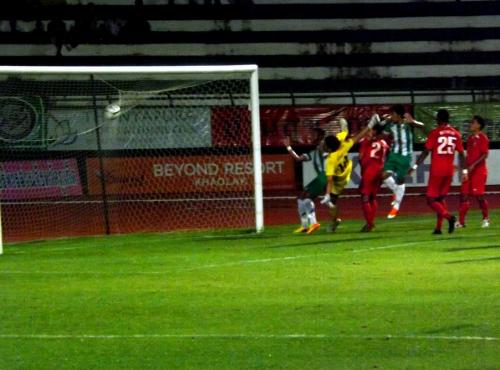 PHUKET: A minor yet vocally active segment of Phuket FC’s supporters got their way yet-again, highlighted by a public announcement on Facebook last night by now-ex Head Coach Paniphon “Tu” Kerdyaem, that he was resigning his post with immediate effect.

Scoring for Phuket on his home debut was Brazilian import Cristian Alex, with a header on 59 minutes. About 20 minutes later, TTM’s Nigerian forward answered with an equalizer from long range.

Phuket came close to winning the game with several attempts, but as the stars in the clear skies would have it, the match would end in a draw.

Those who have frequented Surakul Stadium in the past few years, hardly lifted an eye.

“He [Coach Tu] had his chance to prove himself in the first half of the season, and draws just won’t get us to the Thai Premier League (TPL), so to show his professional spirit, he should move aside for someone else,” exclaimed one supporter.

The draw against TTM was the third in a row since the start of the season’s second half – and 11th draw of the season out of 20 matches so far; Phuket FC have more draws than any other side in Thailand’s 18-team Yamaha League One (YL1).

“I would like to thank Mr Pamuk [Achiriyachai], Ko Eam, Ko Jieo [Niwat Nuisanga], the executive team and all the staff, players and fans who have supported me. I’ve been happy working with you all here, but in the end, I’ve had to consider resigning as Head Coach from this point on… Thank you… Paniphon Kerdyaem.”

Coach Tu’s league record of 6 wins, 11 draws and three losses, coupled with a cup record of 2 wins and 2 losses is actually decent when compared to the combined record of the previous handful of coaches that have passed through the last two seasons.

Under Coach Tu’s leadership in the first 20 of 34 league matches this season, the club’s win rate was 30%, followed by a 55% draw rate and only 15% loss rate – clearly a major difference that fans overlooked in their unchecked expectations for the big leagues.

Following the latest draw, Phuket dropped into 7th place with 29 points, while TTM remain in 15th with 20 points.

Seizing the 6th place spot from Phuket was Nakhon Ratchasima, who on Sunday prevailed at home 1-0 against the high-flying Air Force United “Blue Eagles”, who subsequently dropped into second place of the league as a result, with PTT Rayong surging to the top following their 2-1 home win over Ayuthaya FC, also on Sunday.

Home victories by the Port Lions and Bangkok FC, over Rayong United and Nakhon Pathom, respectively, further deluded the promotion prospects for Phuket, who are now 8 points shy of 3rd place, the final promotion spot.

Following are results from this weekend’s action in Thailand’s League One:

Both Southern Thai teams in the YL1 have home matches next weekend, on Sunday, August 11.

Kickoffs will be at 6:30pm and 6pm, respectively.

Keep checking the Phuket Gazette’s online sports pages, join our Facebook fan page or follow us on Twitter @PhuketGazette for the latest local, national and international sporting news and action.

Ramadan: Feeding the spirit by fasting