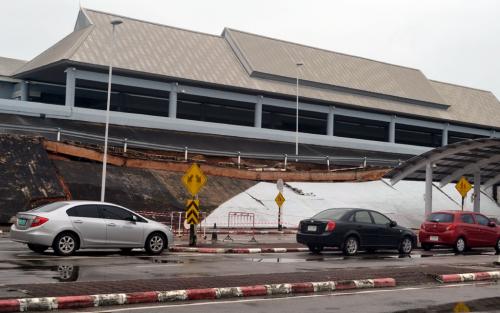 PHUKET: Authorities have closed the ramp road to the domestic terminal at Krabi International Airport after heavy rain over the past week washed away the earth underneath a retaining wall, causing the road to subside.

The damage was reported by a tourist at 9:30am on Saturday, Krabi Airport Director Sunyaluk Kraiboot told the Phuket Gazette.

“The retaining wall collapsed, causing about 10 meters of the road outside the terminal to sink,” he explained.

“We have closed the road and roped off the area to prevent vehicles and passengers from attempting to use it,” Director Sunyaluk said.

In the meantime, domestic passengers can be dropped off at Terminal 1, for international arrivals and departures, and walk to Terminal 2 using the elevated walkway.

“We have also opened a service road to allow vehicles to drop off passengers at Terminal 2, but not at the main entrance,” Director Sunyaluk said.

The damage has been reported to the Department of Civil Aviation (DCA), which recently spent 743 million baht on upgrading the entire airport, to request funds for repairs to the road and the retaining wall.

“We have also requested an expert at the DCA to inspect the site to ensure that the terminal has not sustained any structural damage,” Director Sunyaluk said.

Eakkawit Pinyothammanothai, president of the Krabi Hotels Association, called for temporary repairs to be made in order to re-open the terminal as soon as possible.

“While waiting for the budget, the airport authority should fix the wall themselves, even with just temporary repairs. They should fix this as fast as possible to restore people’s confidence in the facility,” Mr Eakkawit said.