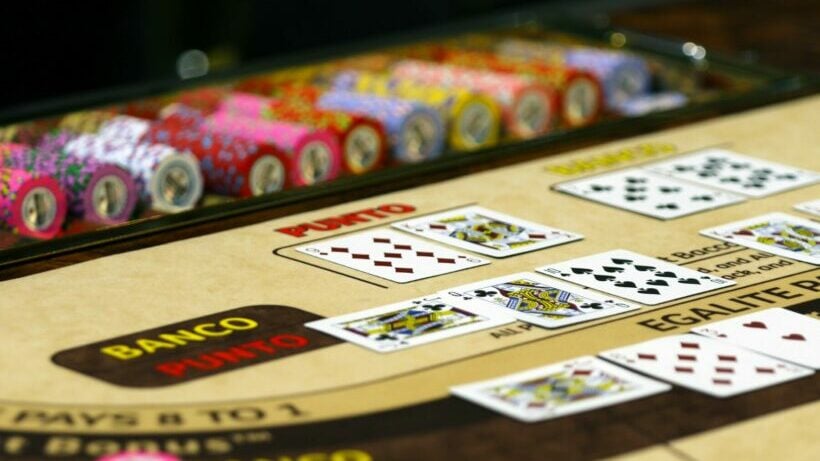 Over the weekend, an illegal game of Baccarat was busted, Now, Phuket city police are under investigation for their lack of intervention Vis-à-vis gambling in their jurisdiction.

The Region 8 Police Commander, Kitrat Panpetch gave an order yesterday to transfer the 5 officials from Phuket City Police Station. They will temporarily work out of the Region 8 headquarters at a different part of the island while an investigation into their actions is underway.

The Phuket City Police who are going to be transferred were identified by rank only by Commander Kitrat. They are:

However, Thai media Post Today filled in the blanks/names

The local politician who was also arrested at the baccarat game has still not been named. However, the name of the gambling den/baccarat event was identified by the fierce feline name: “Dragon Tiger”.

#1 on the transfer list, Police Chief Col Theerawat, say he and his fellow officers are ready to follow the commander’s order…To be transferred. He says the Phuket City Police performed their duties with their best intentions and capabilities. Theerawat adds that before the arrests took place, the officers coordinated and shared information with the Central Investigation Bureau.

“When the commander gives us orders, we need to follow them,” says Theerawat.

The Phuket Governor, Narong Woonciew told the press about the transfers, yesterday.

“The Phuket government has ordered all officers on the island to look for and take action on any gatherings for illegal purposes, especially gambling, and our police have patrolled frequently and taken decisive action,” Says Narong.

He also said that the local politician who was allegedly present at the Dragon Tiger will be prosecuted under the “relevant law”.

Thailand allows gambling… for occasions such as merit-making when it’s part of a funeral, but only if it has explicit permission from local agencies and local administrative officials. The gambling that is, not the funeral.

harry1
15 hours ago, JohninDubin said: I recall a few years back, reading a story in one of the Pattaya online news sheets about a gambling arrest that was made in Pattaya. It involved three bargirls who while waiting for customers,…
vlad
You would have thought the Governor of Phuket would be closely watching his Sandbox and stamping down heavily on anyone disrupting or damaging the image he is trying to project. Yet his department of law has been seen as untrustworthy…

gummy
1 minute ago, vlad said: You would have thought the Governor of Phuket would be closely watching his Sandbox and stamping down heavily on anyone disrupting or damaging the image he is trying to project. Yet his department of law…
vlad
I think we all know that one Gummy. See the Boss's wish of not letting the Phuket Mafia spoil the Sandbox was taken seriously.
BJoe
So typical of Thailand where crooked or incompetent officials are transferred or relocated, to again function in an unprofessional official capacity.