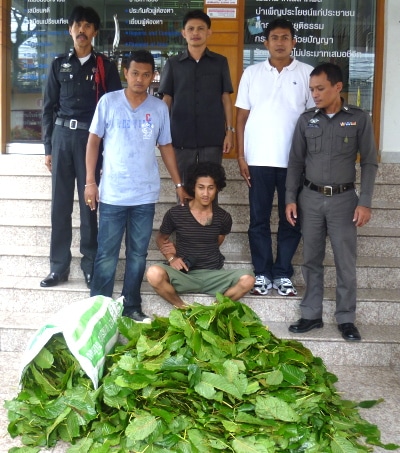 PHUKET: Phuket Police acting on a tip-off yesterday arrested a dealer and seized 54kg of kratom leaves from an address in Cherng Talay.

Col Jirasak Siemsak received the tip-off at about 5pm and quickly put together an investigation team under the command of Maj Pongnarin Suthin.

On arrival at a house on Soi Pasak 4, off the Baan Don-Cherng Talay Road, police were spotted by the suspect, who then tried, unsuccessfully, to make a run for it.

A subsequent search of the house revealed a fertilizer bag containing 17kg of kratom leaves and a large blue plastic box containing 37kg of the mild narcotic.

During questioning Mr Chainarong revealed to the police that he ordered the kratom from a “Mr Lik”, who works at the Tha It [sic] market in Nakhon Sri Thammarat.

To disguise the consignment, Mr Lik placed the illegal kratom leaves on trucks used to deliver fresh vegetables to markets in Thalang and Muang Districts in Phuket.

Police are to investigate further, but for now have charged Mr Chainarong with possession of a category five drug with intent to sell.

Despite the trees being native to Southeast Asia, their leaves have been designated a controlled substance, in the same category as cannabis, since promulgation of the Kratom Act in 1943.