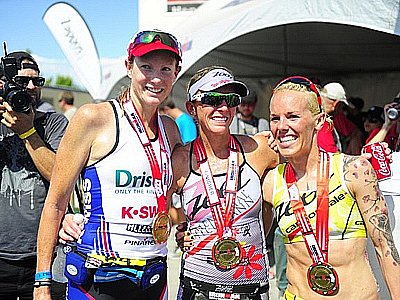 PHUKET: The recently-crowned 2012 Ironman 70.3 World Champion, Leanda Cave, has signed up for the Laguna Phuket event less than 24 hours after completing her epic World Championship victory in Las Vegas on September 9, and before resuming training for her next title bid at the Ironman World Championship in Kona, Hawaii on October 13, it was revealed by the Laguna resort complex yesterday.

Her Laguna confirmation has set up a thrilling duel with 2011 Ironman 70.3 World Champion and defending Laguna Phuket 70.3 Champion Melissa Hauschildt of Australia who was beaten into fourth place on September 9 by Cave, more than seven minutes behind Cave’s winning time of 4:28:05.

At Laguna Phuket, Hauschildt will be aiming to hold off the challenges of Cave, Rodickova, Granger and a field of other top pros to hold on to her 2011 title, which she won with a course record of 4:17:01.

Having Leanda Cave join the ranks of top professional athletes set to appear at this year’s competition on December 2 is a major coup for the Phuket event, said Debbie Dionysius, assistant vice president of destination marketing for Laguna Phuket.

“To have the brand new Ironman 70.3 World Champion immediately accept our invitation to race at Laguna Phuket is a testament to the drawing power and popularity which characterizes our race on the pro circuit. Attracting such top talent is an indication of the international stature we’ve achieved and we’re looking forward to a fantastic display of world-class competition.”

The Laguna Phuket 2012 competitive mix is also fueled by Czech Olympian Radka Vodickova and Australian veteran Belinda Granger – both vying to become the first women’s Triple Champion of the Laguna Phuket Triathlon (LPT), a week earlier on 25 November – and also with points to prove in the 70.3.

UK born Cave emigrated to Australia as a child, before moving back to the UK with her Welsh mother. She now lives and trains in Tucson, Arizona and races for both Wales and Great Britain.

An ITU World Long Distance Champion, Cave is hitting peak form in the run-up to Kona and Laguna, despite an indifferent start to the year that followed a spectacular end to her 2011 season when she recorded a third-place finish at the Ironman World Championship, a win at Ironman 70.3 Miami, a runner-up finish at the ITU World Long Distance Championship in Las Vegas, and her first Ironman title in Arizona.

Cave is no stranger to Phuket, having raced LPT in 2006 when she was second-place behind Canadian Samantha McGlone, who went on to become 2007 Ironman 70.3 World Champion.

The Ironman 70.3 is proudly sponsored by the Phuket Gazette, PGTV and the nationally televised Phuket Today show on UBC/True Visions channel 99.

Phuket City to spend more than B100mn on flood defense

Dealer busted after kratom smuggled into Phuket as ‘fresh vegetables’