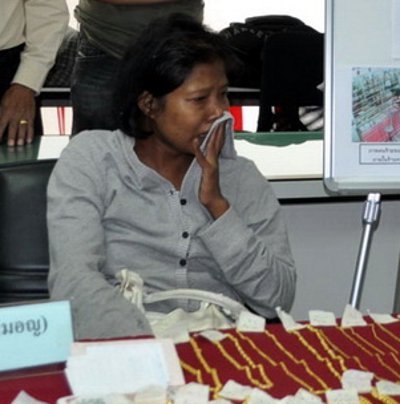 PHUKET: The captured wife of a brazen smash-and-grab gold thief last night begged her husband to turn himself over to the Phuket Police so that she could return to Burma and take care of her children.

In the midst of tears, Mrs Musa insisted that she did not know the shampoo bottles she was fleeing to Burma with were stuffed with 69 gold necklaces valued at 1.8 million baht.

However, until the two thieves are caught, police plan to leave her locked up at Phuket City Police Station for further questioning.

“Mrs Musa denied any involvement in the robbery and explained that Mr Koson [one of the suspected gold thieves] had packed the two shampoo bottles in her bag,” said Phuket City Police Investigation Inspector Prawit Engchua.

“She told us that Mr Koson said that he had a problem with one of his friends and that he had to get away. He then told her to go back to Burma immediately. He was going to stop by his sisters’ house near the Kathu Waterfall with a friend,” Lt Col Prawit explained.

The friend, a Burmese man named so far only as “Mr Mek”, is now thought by police to have been the other member of the gold heist duo.

Mrs Musa was arrested at Bangkok’s Mo Chit Bus Station yesterday. She told police that she had decided to take the bus from Phuket to Bangkok, where she wanted to visit her sister before making her way to the border crossing at Mae Sot.

Phuket City Police Superintendent Sermphan Sirikong said that he believes Mr Koson is still in Phuket, but that Mr Mek might have already left the island.

“Our team of investigators discovered that Mr Koson has many friends in Phuket. He worked as a roadside food vendor, a fish processing dock worker and a squid seller. He must know a lot of people to have done so many different types of work,” Col Sermphan said.

Police questioning of Mr Koson’s sisters, who run a small restaurant near the robbed Yong Chuan gold shop, revealed that Mr Koson had called the sisters as recently as yesterday, explained Col Sermphan.

“I believe Mr Mek and another suspect have already left Phuket with some of the gold. However, we have contacted Provincial Police Region 8 and Immigration police throughout Thailand to be on the lookout for Mr Mek as well as Mr Koson,” he said.

“If Mr Koson is still in Phuket, we should be able to arrest him soon,” he added.

Dealer busted after kratom smuggled into Phuket as ‘fresh vegetables’