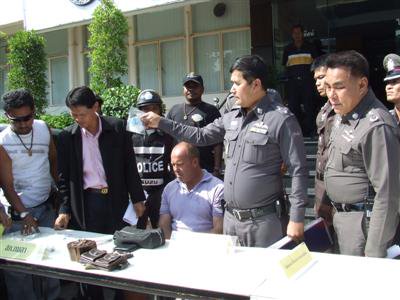 KAMALA, PHUKET: A British man faces the prospect of a lifetime in jail after being caught at a Kamala Police checkpoint with cocaine, ya ice (crystal methamphetamine) and marijuana on Wednesday.

David Kevin Griffin, 49, was driving toward Patong when he was stopped by Kamala Police officers at around 1:45 am at the checkpoint in Nanok Village.

Police say they searched Griffin and found a total of 16.48 grams of cocaine divided into 11 sealable plastic bags in his wallet, together with 22,470 baht in cash.

Stashed in a mobile phone case on the front passenger seat they discovered 10 bags of ya ice, weighing a total of 16.31 grams, as well as a bag containing around three grams of marijuana stashed in a fanny pack, police said.

Four empty re-sealable zipper storage bags and equipment for taking ya ice were in a black bag with some clothes on the back seat, they added.

Police said they later searched Mr Griffin’s house in Tambon Thepkrassatri and found 8.25 grams of dried marijuana, 29.96 grams of marijuana resin, and eight plastic bags in a wooden box in a cupboard.

The heavy-set Mr Griffin barely raised his head as details of the arrest were made public at a press conference in front of Phuket Provincial Police Station on February 4.

Mr Griffin confessed to charges of possession of a Class 5 drug (marijuana).

More seriously, he is being charged with possession of two Class 1 drugs (cocaine and yah ice) with intent to supply. If found guilty, he could be sentenced to five years to life in jail and fined 50,000 baht.

A report in the Manchester Evening News said Mr Griffin was a resident of Greater Manchester and had been living in Phuket for four years, working in the property industry at the time of his arrest.